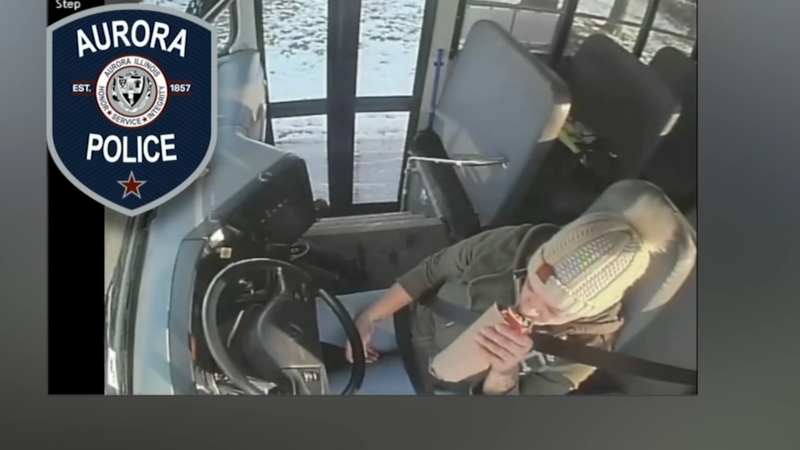 AURORA, Ill. (WLS) -- A school bus driver was arrested after police say she drank beer while picking up students for school in west suburban Aurora.

According to the Aurora Police Department, 44-year-old Michelle Passley picked up the school bus around 6 a.m. on November 15 and completed one route before buying two cans of beer at a Speedway gas station in the 900-block of North Farnsworth Avenue.

A school bus driver was arrested after police say she drank beer while picking up students for school in west suburban Aurora.

Video from the school bus appears to show Passley placing the beer can into a brown paper bag and drinking from it while driving as many as 32 elementary school children on the bus, police said.

Police credited the alert gas station clerk for contacting East Aurora School District 131 after selling beer to the driver and watching her drive off in the bus.

"Shoutout to that convenience store clerk who had the wherewithal to contact the district so that they could intervene," Aurora Police Chief Kristen Zinman said.

East Aurora School District 131 said Passley is not an employee of the district and contracts First Student Bus Company for its busing services. A manager for the school bus company reported the incident to police after reviewing video from the bus, police said.

In a statement, First Student Bus Company said: At First Student, there is nothing more important than the safety of the students we transport. We understand and share in the concern this incident has caused. We are incredibly disappointed by our former driver's actions. First Student has a zero-tolerance policy for employees whose actions may put others at risk. Behavior such as this is completely unacceptable and at odds with what we stand for as a company. The driver has been terminated. Since the incident occurred, we have been working with the authorities to support their investigation. Given that this is an active investigation, we are unable to comment further.
Passley wasn't arrested until Monday, more than a week after this video appears to show her sipping beers and steering a school bus.

Fortunately, police say no students were injured even though parents and investigators are appalled.

"It's infuriating to believe that someone who is trusted with these children on a daily basis could potentially put them in this kind of danger," Chief Zinman said.

Passley is charged with two misdemeanor counts of endangering the life/health of a child. She has been released on $100 bond, according to police.

She is due in court again on December 27.