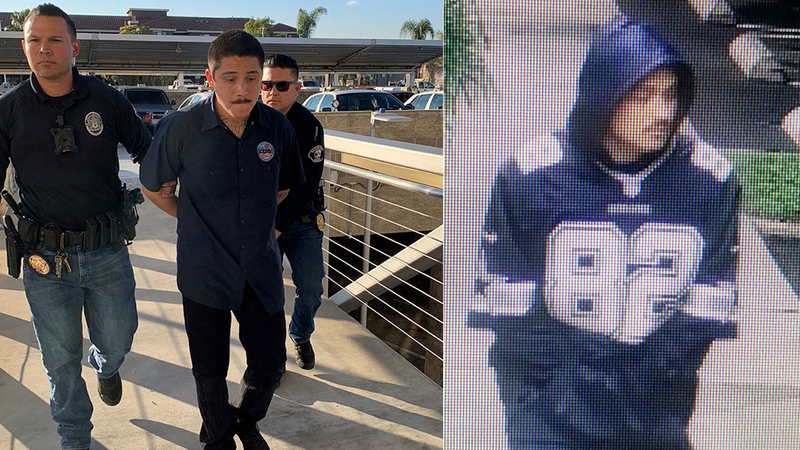 SANTA ANA, Calif. -- Santa Ana police have arrested a 27-year-old man in a sexual assault of a woman who was waiting for a bus.

The incident happened Saturday night at a bus stop near Bristol Street and MacArthur Boulevard.

A woman who was waiting for a bus in Santa Ana was sexually assaulted by a suspect and it was caught on video by a bus camera.

They say earlier in the evening, Hernandez had been at a local Buffalo Wild Wings just blocks from where the attack occurred. He was kicked out of the restaurant for belligerent behavior, police say. Evidence from the restaurant helped lead to Hernandez.

Surveillance video showed the sexual-assault suspect wearing a Dallas Cowboys No. 82 jersey and police say they recovered a similar jersey from Hernandez.

Detectives arrested Hernandez as he left his workplace in Irvine. He was booked at the Orange County Jail and is being held on $1 million bail.

The assault was caught on camera by an Orange County Transportation Authority camera.

Authorities said the victim is a woman in her 50s. Detectives said the assault was interrupted when a bus pulled up and passengers got out.

The suspect pulled up his pants and took off.