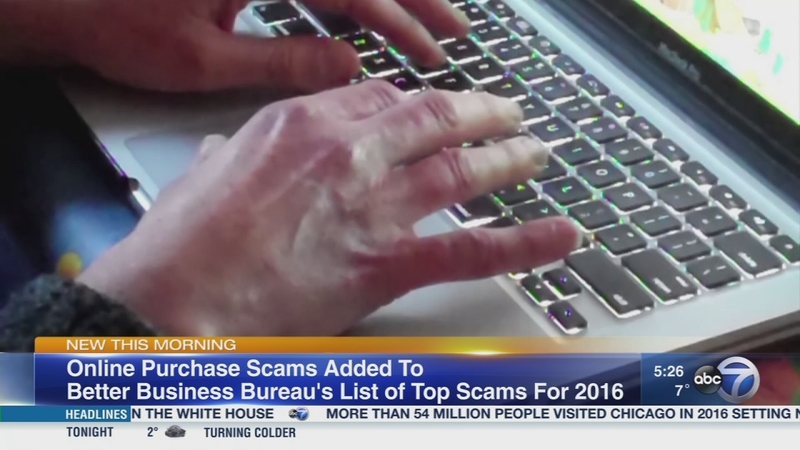 CHICAGO (WLS) -- Steve Bernas of the Better Business Bureau joined ABC7 News This Morning to talk about the top scams of 2016.

In 2016 BBB Scam Tracker confirmed that tax scams still are at the top of the list, despite a huge drop in reports after a September police raid in Mumbai, India.

While the raids have had a huge impact on the reduction of fake IRS calls, the BBB will keep close watch for any resurgence with a new tax season soon approaching.

Chicago and Northern Illinois BBB president and CEO, Steve Bernas says, "These scams continue because they are successful enough to make it worthwhile for these thieves to keep trying to con people out of money. There is a science to scams, and it may surprise you to know that scammers use many of the same techniques as legitimate sales professionals. The difference, of course, is that their pitch could cost you a fortune."

The top three scams on the 2016 list - tax scams, debt collection scams, and sweepstakes/prizes/gifts scams - were the same as in 2015. New to the top ten are online purchase scams (#4) and phishing scams (#10). Online purchase scams were common in 2015 as well, but this scam type was not added as a BBB Scam Tracker category until 2016. Employment scams (#5) are also new to the top ten, but only because work-from-home scams, previously a separate category, were included. Another change was the drop of tech support scams from #4 last year to #7 this year.

The list was compiled based on more than 30,000 scam reports filed by consumers on bbb.org/scamtracker, a free interactive online tool launched last year by the BBB Institute for Marketplace Trust. Not all of those consumers lost money, as many recognized the scam before being victimized but reported it anyway to help warn others.

BBB encourages consumers to learn how to recognize scams and to avoid them by following these ten simple steps: bbb.org/avoidscams

An emerging local trend seen in the Chicago and Northern Illinois Scam Tracker in 2016 are scammers posing as fake utility workers or security system workers. The BBB continues to keep a close watch of weekly information, especially after reports by some utility companies that counterfeit vests were being sold at Chicago summer festivals.