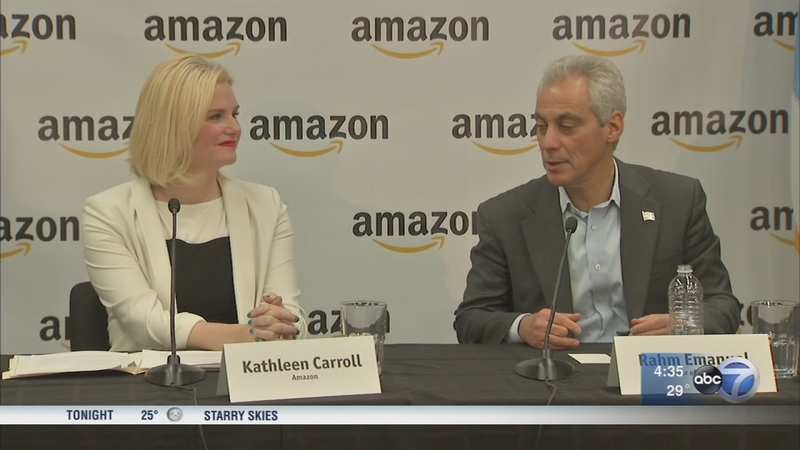 CHICAGO (WLS) -- Amazon has received 238 proposals from cities eager to land the company's second headquarters, but Mayor Rahm Emanuel has kept quiet about Chicago's bid for the coveted HQ2.

Emanuel met with an executive from Amazon's Seattle headquarters Friday for a Veteran's Day event at the company's Chicago offices. Emanuel and the executive discussed ways to help veterans find jobs, a project for which the city and Amazon have programs in place.

Emanuel pointed to the event as a good sign for Chicago's bid to host HQ2 but kept the contents of Chicago's promotional video for Amazon's HQ2 under wraps.

"We're going to be incredibly competitive because today's event between the city and Amazon on Veteran's Day, about hiring veterans, this is the only city they're doing this at," Emanuel said. "They're now using Chicago as a template. We have an incredibly close working relationship."

An Amazon spokesperson said that Amazon will host a series of Veteran's Day events in cities where they have distribution centers and at the Bush Institute in Dallas.

Competitor cities like Atlanta have released their videos to the general public.

"The other cities have released their video and we're studying their video," Emanuel said. "They don't have the opportunity to study ours because we consider this a competitive process."

Some consider Atlanta to be a front runner for Amazon HQ2 and the 50,000 jobs it's expected to bring to the winning city. Irish betting site Paddy Power named Atlanta the odds on favorite at 3:1. Chicago tied for fourth favorite, with odds at 16:1.

Emanuel would not comment on whether he has received feedback on Chicago's bid.
Report a correction or typo
Related topics:
businesschicagowest loopamazonrahm emanuel
Copyright © 2021 WLS-TV. All Rights Reserved.
More Videos
From CNN Newsource affiliates
TOP STORIES