WLS
By Jessica D'Onofrio and Evelyn Holmes
CHICAGO (WLS) -- A Whole Foods grocery store opened Wednesday in Chicago's Englewood neighborhood, a violence-plagued area on the South Side that is often called a fresh food desert.

Despite the rain, people cheered as the front doors slid open for the first time at 9 a.m. The store is located at the corner of West 63rd and South Halsted streets

"It's a great thing. New environment, new things. A pleasure to happen," said Zachary Williams, one of the first new shoppers.

Plans for the 20,000-square-foot Whole Foods started in 2013. It is part of a $20 million development project called Englewood Square, which includes a Starbucks. Many hope it will be a catalyst for change in the neighborhood.


After a ribbon-cutting ceremony, Emanuel went inside and bought a smoothie and then spoke exclusively to ABC7 about the criticism surrounding the Whole Foods plan.

"You can see this is worth all the effort, to see the economic opportunity and the hope where there was despair," said Chicago Mayor Rahm Emanuel, who attended the grand opening.

The grocery offers fresh and organic produce, unique and traditional items, an indoor cafe and multiple options for prepared food.

The company sought input from Englewood residents about the type of products they wanted and worked to make them affordable. There are also items unique to the South Side store, including banana pudding and bean pies.
"When a company and a community are willing to think differently about each other, something magical can happen," said John Mackey, co-founder and co-CEO, Whole Foods Market.

The grocery store also created hundreds of jobs. The Englewood store employs about 100 residents and more than 25 local suppliers stock its shelves.

The hope is that the grocery will make healthy food options more accessible to people who live on the South Side.

"I think this is wonderful. I've been shopping at Whole Foods for 20 years, going up north to Roosevelt. This is in the neighborhood where I live. I'm so ecstatic," said Jackie Nicholson, a loyal Whole Foods customer. 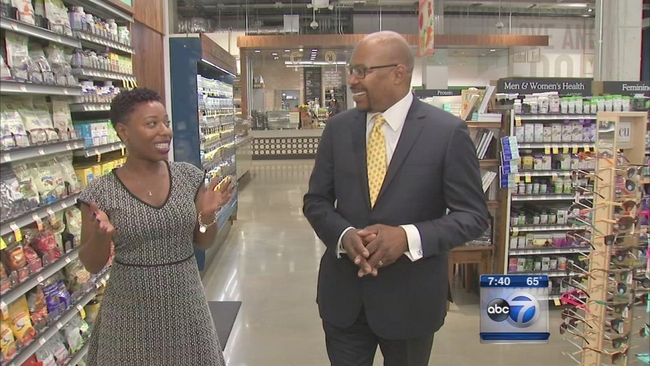