WLS
By Eric Horng
CHICAGO (WLS) -- The Yellow Cab Company filed for bankruptcy just hours after it was ordered to pay $26 million for an accident that left a man with permanent brain damage.

Yellow Cab markets itself as the largest and oldest taxi company in North America. The drivers are all independent contractors, but a jury found the company liable for a tollway accident 10 years ago.
The 2005 crash left the taxi mangled and back seat passenger Marc Jacobs with brain damage.

"He suffers from insomnia, anxiety, slurred speech. His voice is no longer the same. His ability to live a normal life has been permanently altered," said Tim Tomasik, plaintiff's attorney.

Tuesday night at the Daley Center, a jury awarded Jacobs nearly $26 million a decade after the crash just off I-294. The taxi careened off the Ogden exit and into a concrete barrier.

At the time, Jacobs was a 44-year-old Chicago real estate attorney and law firm partner on his way home to Hinsdale from a client dinner.

The driver was less-seriously injured than Jacobs. Though he was an independent contractor, as all Yellow Cab drivers are, Jacobs' attorneys argued the company was liable.

"They use this brand to promote themselves to the public, and then when something goes wrong, they say, 'Whoa. The public is not our client, only the guy who licensed the brand from us,'" Clifford said.

Hours after the verdict, Yellow Cab filed for Chapter 11 bankruptcy. The company's president declining an on-camera interview, but told the I-Team: "Our assets were less than our bills after the verdict. We couldn't pay it off."

"That bankruptcy is designed to protect Yellow from being accountable for this verdict," Clifford said.

Yellow Cab says it plans to appeal the verdict. The company will continue to operate while in Chapter Eleven bankruptcy, so you'll continue to see those Yellow taxis on the street. 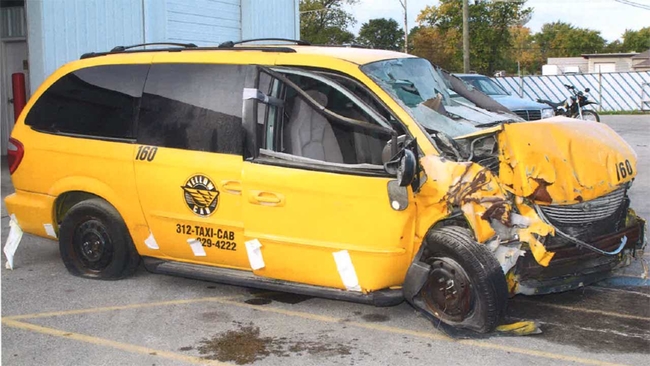