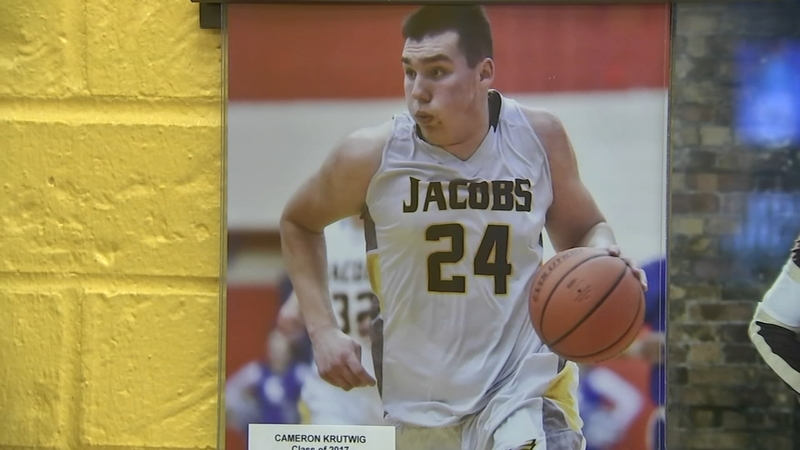 ALGONQUIN, Ill. (WLS) -- He was a force on the basketball court as Loyola beat No. 1 seed Illinois last weekend.

Cameron Krutwig is the leader for the Ramblers team that has drawn a national following. He's also the pride of Algonquin's Jacobs High School.

"It's not like a kid that played here four years and then left and was gone. He's a huge part of our community," said Jimmy Roberts, the Jacobs boys basketball coach.

There is the picture of Krutwig on the school's wall of fame. He signed his letter of intent to attend Loyola here four years ago.

His former government teacher is making rope necklaces in Loyola colors to show their support.

A fully-vaccinated Sister Jean is in Indianapolis this week to cheer on her Loyola Ramblers in the NCAA tournament.

"It's just something we put together to honor him. We're excited and proud of him," said Steven Stukenberg.

Krutwig was a freshman during Loyola's final four run three years ago. But this year, as a senior, he has also addressed the media after games.

"We definitely think we're one of the best teams in the country, but we have to back it up with your play," Krutwig said in the post-game news conference Sunday.

Coach Jimmy Roberts was at the game Sunday in Indianapolis to support his former player, just as Krutwig comes back to Jacobs to support his school. The two talk just about every day.

"He's just become a good friend. During the season, there's nobody I communicate with more than him," said Roberts.