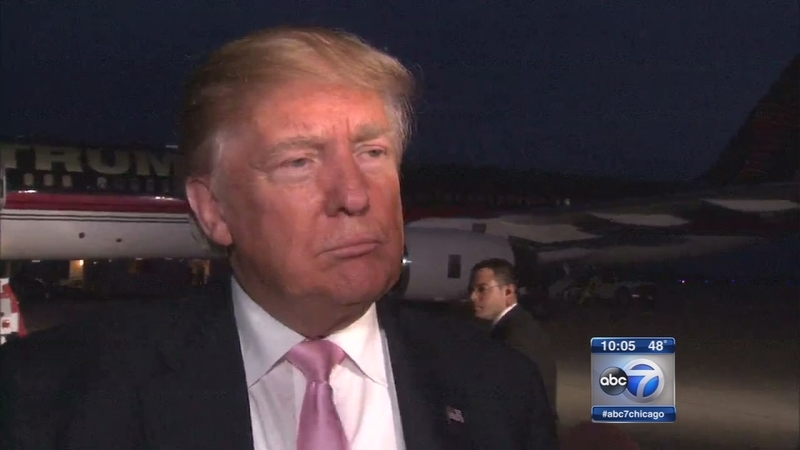 YOUNGSTOWN, Ohio (WLS) -- Republican presidential candidate Donald Trump arrived at a rally Monday afternoon in Youngstown, Ohio, where his private 757 served as the backdrop for a quick stop in the important state.

It's a festive atmosphere, but security has been visibly tighter at Trump events in three states after several raucous rallies where protesters have been punched and pepper sprayed. At times, the candidate seemed to encourage the behavior, but on Monday, Trump is taking a different tack.

"Ohio is going to make America great again!" said a kinder, gentler, and a bit less confrontational Donald Trump on the campaign trail Monday. He now claims previous confrontations were not his fault.

"I'm a peace-loving person folks. We love peace. We all love peace. There's no violence. It's a love fest. These are love fests," Trump said.

ABC7's Ben Bradley asks Trump: "How can you call what happened in Chicago and other cities a 'love fest?"

Trump: "Well, I tell you what we did got things right in Chicago. We have 25,000 people coming and we were able to call it off and there was no problem."

Trump did target Ohio Governor John Kasich at an evening rally in a state where polls show the two are tied.

"You gotta beat Kasich. He's weak. Remember when he was a congressman, he signed NAFTA. NAFTA destroyed Ohio," Trump said.

Kasich and Marco Rubio responded by saying they may not support Trump if he's the nominee.

"I don't know. I still at this point intent to support the republican nominee but it's getting harder every day," Rubio said.

A win in Ohio on Tuesday would help Trump cement his path to the nomination and defuse talk of a contested convention.

"Where its momentum or whether it's whatever, we have something going that people haven't seen before," Trump said Monday afternoon.

Kasich hasn't won a single state yet, but if he denies Trump his state's 66 delegates, it could slow the front runner's momentum. Kasich campaigned with Mitt Romney on Monday.

"I'm not into any sort of stop anybody movement. This is about me and it's about the record I have and the team I've put together," Kasich said.

Kasich - whose positive message has struggled to gain traction - took a slightly harsher tone against Trump's tactics in an interview with Eyewitness News.

"I turned on the television Friday night and watched these people slugging it out. These are images that have been broadcast all over the world. There isn't any question that he has created a toxic atmosphere," Kasich said.

But some Ohio Republicans are against their governor, saying Trump turned them with his tough talk.

"If he only accomplished 10 percent of what he says he can do, we will be light years ahead," said Jack Canzonetta, a Trump supporter.

Meanwhile, polls show Marco Rubio may get trounced by Trump in his home state of Florida.