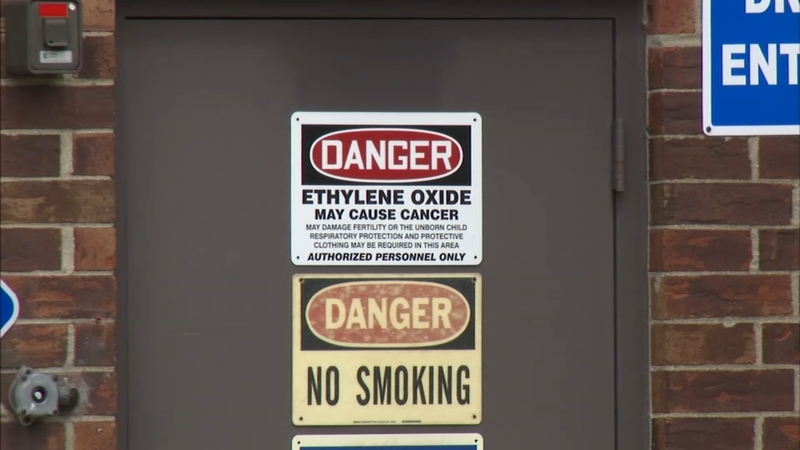 WILLOWBROOK, Ill. (WLS) -- He has only lived in suburban Willowbrook for two years, but Kyle Evenson is worried about his health and the health of his neighbors who have lived here for decades.

A recent federal report says the Willowbrook company Sterigenics has been releasing levels of a gas that could be harmful to the public.

Sterigenics is a few blocks away from Evenson's home. Using two buildings, the company provides sterilization services for products by using the gas ethylene oxide.

Dr. Peter Orris with University of Illinois at Chicago School of Public Health said the chemical has been used for sterilization across the country since the 1970's.

"This is a carcinogenic chemical, a known human carcinogen, we want to reduce it as much as possible, we certainly don't wan to get into into the community," said Orris.

Besides workers at Sterigenics, no one is closer to what may be released into the air than Willowbrook's Mayor Frank Trilla. His office is right across the street from Sterigenics. He said he was blindsided by the report released last Friday.

The EPA has assured Trilla it is safe for him and others to open their windows.

"We've been assured that there is no short term risks, but we have concerns about long term exposure," Trilla said.

In a written statement released by Sterigenics parent company Sotera Health said, "Willowbrook's air pollution control equipment is state-of-the-art and the facility achieves and exceeds all compliance goals set by the EPA and Illinois EPA for air emission reductions."

Steringenics said it just upgraded its facility to reduce ethylene oxide emissions by over 90 percent.

Governor Bruce Rauner, who has business links to the company, said the federal report has created unnecessary panic.

"This is not an emergency, not a public health crisis," Rauner said.