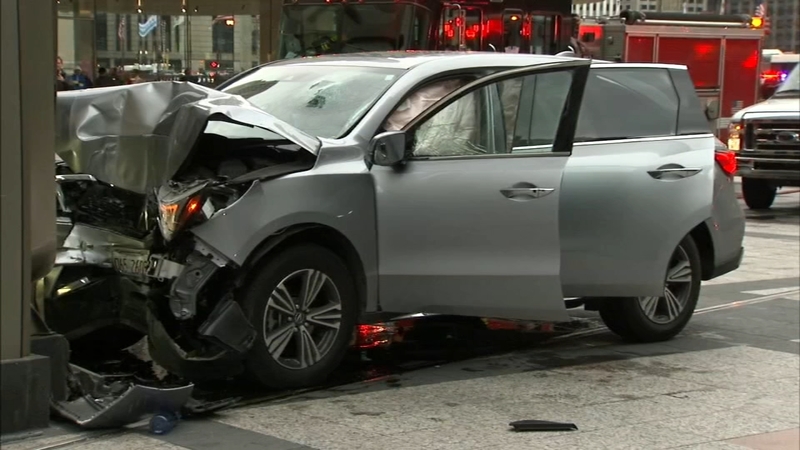 CHICAGO (WLS) -- A car crashed into a building on Michigan Avenue Friday afternoon.

The car crashed into a pillar at a building at 401 North Michigan Avenue, just next to the Apple Store, at about 4 p.m.

The silver SUV jumped the curb near Tribune Tower, struck a black sedan and then careened across a plaza until it struck the pillar.

"I was by that bridge over there and I was walking this way and I just heard a big boom. Came running over here and I saw a man on the ground," said Neboisa Arnautovic, witness.

Police said their preliminary investigation found the SUV had been left unattended in the 400-block of North Michigan Avenue when a 15-year-old boy in the driver's seat of the car accidentally put the vehicle into drive. The car then collided with a parked car, sending the silver vehicle over the curb and into the building.

Police said all three juveniles were taken to Lurie Children's Hospital, but did not comment on their conditions. A woman in the parked car the silver vehicle hit was taken to Northwestern Memorial Hospital in good condition.

Police are still working to determine who left the vehicle unattended. No pedestrians were injured, police said.

"There was one lady that dove out the way, but as far as I could tell everybody was just steer clear of it, it was a miracle that it happened," said Dominick Steen, witness.

Most witnesses said they heard a very large bang and didn't see the entire incident.

Witnesses said a man rushed out of a nearby building and pulled the person in the driver's seat of the car.

"I just heard a bang and I sprinted and went and grabbed the guy," said Jonathan Ballew.

Ballew said he had been a U.S. Marine for five years, but didn't have medical training.

"I didn't know exactly what to do," Ballew said. "I just pulled the guy out, that's it. I just kept his head straight, told him everything's going to be ok, had someone call 911."

The officer at the scene said the SUV could have been going as fast as 60 miles per hour when it hit the pillar.