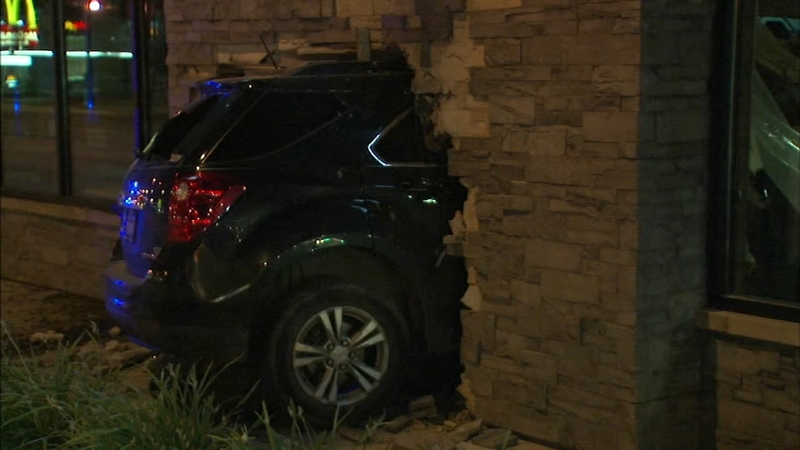 CHICAGO (WLS) -- The driver of an SUV plowed into a Panda Express near Midway Airport Thursday morning and left behind a major mess.

Chicago police said the driver smashed through the walls of the restaurant at about 1:18 a.m., with nearly the entire car ending up in the dining room.

Police said he was heading east on 65th Street when he took a last-minute right turn onto Cicero Avenue. He lost control of the car and smashed through the walls of the restaurant.

The driver then ran away from the scene and left a woman sitting in the passenger seat. The woman had minor injuries but refused emergency medical treatment. No other injuries were reported.

WATCH: SUV crashes into Panda Express. The Equinox now sits in the dining room as police work to track the driver down. Police say he lost control while turning in the 6500 block of South Cicero and drove through the wall. @ABC7Chicago pic.twitter.com/lHO7OIKftC

"The damage is about as bad as it can get," said Todd Stolz of Maintenance Tech Inc. "They completely stuffed the car inside of there."

Stolz is now part of the team assigned to help fix the mess.

"Blew out all the wall studs, knocked out the pop machine, the ice maker, short walls that were in there," Stolz said. "The biggest thing is whether or not it is load-bearing and if the wall will collapse."

The SUV plowed through several feet of wood, metal and stone.

"Those are 2x6 studs in that wall, plus there is at least a four foot wall that they hit and knocked completely out," Stolz said. "They had to be going at a pretty good clip."

The driver is not in custody. Police do not believe the car was stolen.