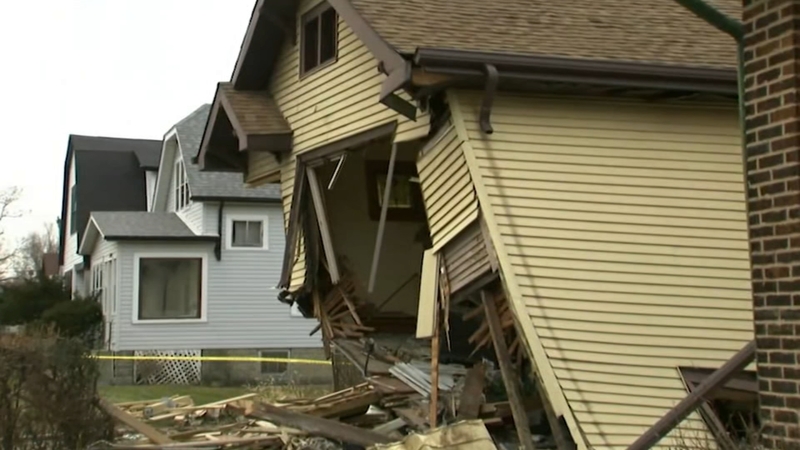 CHICAGO (WLS) -- A family narrowly escaped injury when an SUV slammed into their home following a police chase on the Far South Side Thursday night.

Police said that at around 7:20 p.m. officers attempted to stop a car for erratic driving near 107th and South Wentworth Avenue. The car took off and lost control, slamming into the home.

Police said three people were in the car, who police believe are all teenagers but their ages have not yet been released. The driver was pronounced dead at the scene. A male passenger and a female passenger were taken to University of Chicago Hospital where their conditions are stable, police said.

Five people inside the home, including someone in a wheelchair, were not injured in the crash.

"It was just like crumbling," Autumn Hill, who lives in the home, said. "If you know what an earthquake looks like, the floor crippling underneath my feet."

The home is all but destroyed, and the family is trying to salvage what they can, including her grandmother's wheelchair, and a memory here and a keepsake there.

"We were able to get more stuff that they didn't have now, so at least they have a little clothes and a little bit of stuff to work with," Hill said.

"This is life. This is their home. Everything is messed up, but for us to get some stuff is amazing," said Tameka Royston, relative.

Hill, who is four and a half months pregnant, said the crash happened as she and her 8-year-old daughter returned home from a school activity.

"Once it hit, it shifted right underneath my feet and it was like I was standing on top of the car at one point," she said. "And then I had to hurry up and get her because it's started collapsing."

Hill said her boyfriend was standing on the porch when the Jeep Grand Cherokee careened toward him.

"First, I heard the police sirens and then I looked around, I looked down the street, I see the car coming," the boyfriend said. "It hit that dip that was right there and it started bouncing. When it started bouncing, it lost control and hit the curb and came right into the house."

Chaos ensued as the smell of gas permeated the collapsing house. Hill's boyfriend managed to escape harm while she, her wheelchair-bound grandmother, along with her mother and daughter all managed to get safely to the back of the home.

But the three teens in the SUV, including the driver who was pronounced dead at the scene, were trapped.

"They were yelling, 'Get me out of this car, get me out this car,' and they couldn't get out of the car because it was in our basement," Hill said.

The family remains critical of the police chase.

"Doing it in residential areas is unheard of," Autumn's boyfriend said. "It shouldn't happen because things like this can happen or something worse can happen."

The house sustained major structural damage, but the family said they are grateful they are still together for the holidays.

"We have to restart. There's nothing else to really do at this point. Once the house is gone, it's gone," Hill said.