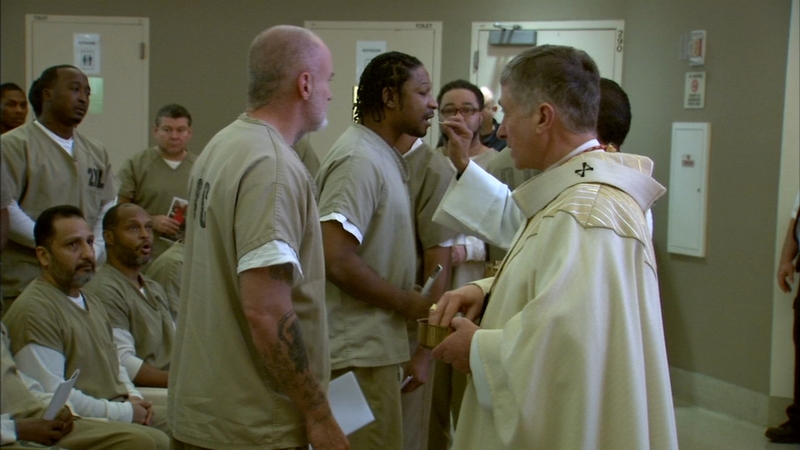 CHICAGO (WLS) -- Cardinal Blase Cupich visited with inmates at the Cook County Jail and led a special mass there on Christmas Day.

The mass and visit was meant to give inmates hope and faith during the holiday season, even as they are locked up and away from their families.

The cardinal assured each inmate they are never too small or unimportant to make a difference.

"It is an opportunity to make sure that we widen the circle of human life and have more room at the table," he said.

Each inmate had the chance to receive communion as Cardinal Cupich spoke about making small changes to better yourself and the world.

"Folks who are sometimes over looked who suffer in the silence of a hospital bed or a prison cell and they are all still part of the human family," said Cupich.

Although Christmas is one of the busiest days of the year for the church, filled with services around the city, Cardinal Cupich said the stop at the jail is just as important as the rest.

"We are going to make sure that nobody is forgotten. Everybody gets to celebrate Christmas and we should feel that we should do everything possible to make that happen," he said.

Chicago Cardinal Blase Cupich celebrated Midnight Mass at Holy Name Cathedral overnight and while he focused on the holiness of Christmas Day, he did briefly refer to the clergy se

Cardinal Cupich celebrated Midnight Mass at Holy Name Cathedral overnight and while he focused on the holiness of Christmas Day, he did briefly refer to the clergy sex scandal rocking the Church.

Cardinal Cupich addressed the scandal briefly at Holy Name Cathedral and spoke in length about making a positive change both in the Catholic Church and your own personal life.
It was a theme that he carried throughout Christmas Mass at midnight. At the pulpit, Cardinal Cupich talked about the importance of working toward salvation and doing your part to make the world a better place.

The service at Holy Name Cathedral lasted about an hour and a half. There was choral music, a nativity scene and Christmas flowers.

As the cardinal discussed the Christmas spirit he also used the time to discuss the clergy sex scandal rocking the Catholic Church. Cardinal Cupich told the large crowd of worshipers he sees people stepping forward to do extraordinary things amid enormous challenges every day.
"I count among this group my brother priests who show up each day to minister to the people under their pastoral care and yet at the same time burdened by the crimes of the few and the mishandling of their superiors," Cupich said. "As one priest told me, he has come to realize that he didn't sign up for this, but he continues because he knows he was sent."