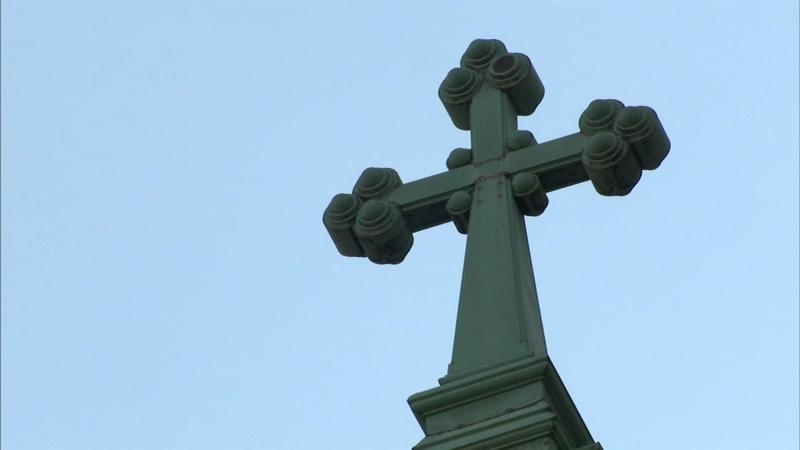 CHICAGO (WLS) -- The Catholic Church is under fire over the handling of sex abuse scandals involving priests. Cardinal Blase Cupich met privately Wednesday with all priests of the Archdiocese of Chicago.

The closed-door meeting was held at 7 p.m. at Mundelein Seminary. Cardinal Cupich wanted to hear concerns from priests discuss the sex abuse scandal that is rocking the Roman Catholic Church worldwide.

It comes one day before the Pope meets with top church leaders about the crisis.

"He's not inviting the public or the media in. He's keeping it secret, which is exactly what the problem has been for the last five to six decades," said Marc Pearlman, who represents abuse survivors.

Just across the street, abuse survivor Bill Reidy, says it's time for the church to start anew.

"I think the best solution for the church is clean out all the churches get rid of all the priests," said Bill Reidy, a priest abuse survivor.

Thursday Pope Francis will meet with U.S. cardinals and bishops at the Vatican to discuss the latest controversies involving priest sex abuse. They are skeptics.

"Men who caused the problem are pretending to be solutions to the problem, and you never go to the source of the problem to solve it," said Kate Bochte with S.N.A.P., the Survivors Network of those Abused by Priests.

The pope will also have a meeting in February to address this issue. Although Cardinal Cupich did not release a statement about Wednesday night's meeting, he did have issues the following statement about next year's gathering:
"I whole heartedly welcome this decision to summon the presidents of the world's bishops conferences to Rome next February. This step is of utmost importance and the lengthy preparation time indicates once again that the Pope is serious about addressing sexual abuse by clergy as a top priority in the global Church. Pope Francis has demonstrated this resolve time and again through a series of concrete actions including removing bishops and cardinals, frequently visiting with victim survivors, and admitting his own mistakes. We are blessed to have the Holy Father's leadership."

Cardinal Cupich was not in the Chicago Archdiocese when a priest molested a 10-year-old Ken Kaczmarz nearly 40 years ago. But Kaczmarz says the Cardinal is failing to take the issue of priest sex abuse seriously.

"Priests, bishops and cardinals, if you participated in the cover-up you need to get out now. And go away and never come back," Kaczmarz said.

Attorney Marc Pearlman, who has represented numerous victims, is skeptical.

"The leadership of the church, their actions, suggest that still, that things really haven't changed nearly enough that people who covered up this abuse are still in positions of power," said S.N.A.P. attorney Marc Pearlman.

Illinois Supreme Court Justice Anne Burke served on a committee appointed by the U.S. conference of bishops five years ago to investigate priest sex abuse. The group is now asking to be reappointed with broader power to investigate church leaders.

"The only way we are going to really trust what is being done is to have civil authorities ask for the information and I do believe that," Justice Burke said.

Ken Kaczmarz is hopeful all the attention on the issue will bring about real change.

"As long as children are not safe we have a major problem here," Kaczmarz said.

Cardinal Blase Cupich will meet privately Wednesday with all priests of the Archdiocese of Chicago.

"We have to get to the bottom of it. Most of the people are very good. We've got some bad actors that we've had," Antonello said.

The meeting comes just as Washington's Cardinal Donald Wuerl has indicated he will soon discuss his resignation with Pope Francis. Cardinal Wuerl was criticized in the recent Pennsylvania grand jury report for his handling of abuse cases when he was in Pittsburgh.

"I wish I could re-do everything over these 30 years as a bishop and each time get it always right," Wuerl said.

Local Catholics said it's a hard conversation to have, but an important one for the future of their faith.

"We want to know what's the truth and what we can do to not only support the mission of the church, but also to preserve the integrity of what our faith is all about," said Anh Tran, outside Holy Name Cathedral.

Pope Francis is summoning the presidents of every bishops conference around the world for a February summit to discuss preventing clergy sex abuse and protecting children - evidence that he realizes the scandal is global and that inaction threatens to undermine his legacy.

Francis' key cardinal advisers announced the decision Wednesday, a day before Francis meets with U.S. church leaders who have been discredited anew by the latest accusations in the Catholic Church's decades-long sex abuse and cover-up scandal.

The Feb. 21-24 meeting of the presidents of the more than 100 bishops conferences is believed to be the first of its kind, and signals a realization at the highest levels of the church that clergy sex abuse is a global problem and not restricted to the Anglo-Saxon world, as many church leaders have long tried to insist.

Earlier this year, Francis faced what was then the worst crisis of his papacy when he repeatedly discredited victims of a notorious Chilean predator priest. He eventually admitted to "grave errors in judgment" and has taken steps to make amends, sanction guilty bishops and remake the Chilean episcopacy, which he accused of helping to fuel a "culture of cover-up."

More recently, Francis' papacy has been jolted by accusations from a retired Vatican ambassador that he rehabilitated a top American cardinal from sanctions imposed by Pope Benedict XVI for having molested and harassed adult seminarians.

The Vatican hasn't responded to the accusations by Archbishop Carlo Maria Vigano, but has promised "clarifications" that presumably will come sometime after Francis' meeting Thursday with the U.S. delegation.

The Vatican said Tuesday the delegation would be headed by Cardinal Daniel DiNardo, president of the U.S. Conference of Catholic Bishops, and also include Francis' top sex abuse adviser, Cardinal Sean O'Malley.

Di Nardo has said he wants Francis to authorize a full-fledged Vatican investigation into ex-Cardinal Theodore McCarrick, who was removed as cardinal in July after a credible accusation that he groped a teenager.

The Vatican has known since at least 2000 that McCarrick would invite seminarians to his New Jersey beach house and into his bed.

DiNardo has also said recent accusations that top Vatican officials - including the current pope - covered up for McCarrick since 2000 deserve answers.

The Vatican in 2011 ordered every bishops conference around the world to develop written guidelines to prevent abuse of minors and vulnerable adults. The Vatican said the guidelines should specify how bishops should tend to victims, punish offenders and keep pedophiles out of the priesthood.

While most have obliged, other conferences particularly in Africa have not, either citing lack of resources or other impediments.

Remarkably, Vatican City itself has no such policy, even though the Holy See promised the United Nations five years ago that it was developing a "safe environment program" - including written guidelines - to protect children inside the 110-acre (44-hectare) Vatican City.

The U.S. conference of bishops issued what is considered the gold-standard policy in 2002, requiring accusations of abuse to be reported to police and the permanent removal from ministry of any priest found to have abused a minor.

But that policy has been questioned recently, given it exempted bishops like McCarrick, who according to the church's own laws, can only be judged by the pope.

The credibility of the U.S. church leadership is now in tatters over the McCarrick scandal and recent revelations in the Pennsylvania grand jury report, which found that some 300 priests abused more than 1,000 children since the 1940s - and that a string of bishops in six dioceses covered up for them, including the current archbishop of Washington, Cardinal Donald Wuerl.

Wuerl, who was bishop of Pittsburg for some 18 years, offered to resign nearly three years ago when he turned 75 but Francis hasn't accepted it. In a letter to priests on Tuesday, he said he would be returning to Rome soon to discuss his resignation, aware that it's time for new leadership.

Since the Pennsylvania report was issued last month, prosecutors in a half-dozen U.S. states have announced plans for similar investigations.

The U.S. isn't alone in digging into its past. On Wednesday, German media reported that a church-commissioned study on abuse in the German church detailed 3,677 abuses cases between 1946 and 2014, with more than half of the victims aged 13 or younger and most boys. Every sixth case involved rape and at least 1,670 clergy were involved, according to Spiegel Online and Die Zeit, which said they obtained the report that was due to be released Sept. 25.