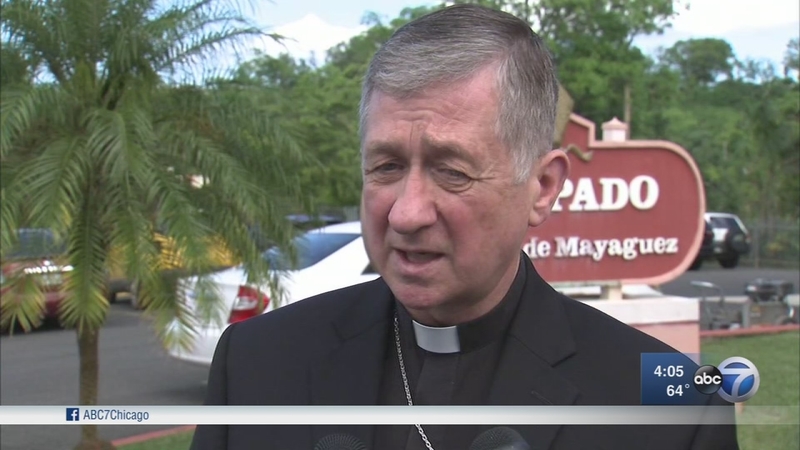 Cupich, the leader of the Chicago Archdiocese, arrived Sunday in San Juan and visited Mayagüez on Monday.

"I think there is an unevenness in terms of the repairs that have been done. Some places are up and running pretty well, and others yet, especially in the more remote areas that I'm hearing about that need a lot of attention," Cupich said.

Cupich announced that Chicago Catholic donations to Puerto Rico are now at $750,000.

"What I'm seeing, in talking to people, there's a lot of work to do, a lot of people suffering," Cupich said.

His visit comes three months after Hurricane Maria hit and is being made at the request of Pope Francis.

Deacon Ramon Echevarria has left everything, including his family, behind in Chicago to give all the help he can in Puerto Rico.

"I said I'm going there, I'm going to help people in whatever way it takes," said Deacon Ramon Echevarria.

For Echevarria, "whatever it takes" means leaving his family behind in Chicago and coming to Añasco, where he looks for those left with little to nothing.

He gives them blankets, pillows, baby items, and water, and it's just his first stop.

"They were so grateful. It's a little bit. To me, it's not a heck of a lot but it means a lot to them - and it should mean a lot to people in Chicago," Echevarria said.

Everything he is distributing was provided through Chicago donations.

Tomas Ayalla cooks a modest meal of pasta, stew and rice on a makeshift fire pit made from a wheel rim.

Tonight he has a new small portable stove in his shelter, where the floodwater marks are near the ceiling.

"I want people in Chicago to know that a lot of people are suffering, people are in pain," Echevarria said.

In nearby Maraguez, Cardinal Blase Cupich noted how uneven the recovery is across the island.

"Some are up and running well, others - in remote areas - need a lot of attention," Cupich said.

That's exactly where Echevarria tries to fill the gap.

"You don't know what it's like until you live it," he said.

He lives compassion with every visit.

"It is hard, actually. I keep a smile to avoid crying," he said.

Edwin Cordero, who survived the hurricane and received help from Chicago firefighters, said: "Oh my God, that was a beautiful sight."

People in the Chicago area have generously given to Puerto Rican recovery efforts.

In Aguadilla in northwest Puerto Rico, where there are snapped power lines and frayed patience, help came in the form of Chicago firefighters who arrived days after Hurricane Maria hit.

"Oh my God, that was a beautiful sight," said Edwin Cordero, who survived the hurricane.

Cordero said: "I was in Vietnam for a year. I never thought I'd have that feeling of being saved ... We were out of water. They brought us water and food, God bless them wherever they're at."

And the best part? One of those firefighters was Cordero's nephew, Luis.

"You can't imagine seeing your nephew here after what we went through," Cordero said. "That's lifesaving. It really is."

Now, Cordero is an even bigger fan of Chicago -- and not just his favorite baseball team.

"I love that Chicago Fire Department and, by the way, I'm a loyal Cubs fan," he said.

Others in the northwestern part of the island saw Chicago generosity first hand as well.

When the group Lipa Help gathered and shipped essential supplies, volunteer Annie Irizarry -- who grew up in Chicago -- made sure it all got to those most in need.

"It was very gratifying to help them, they were without resources. They were desperate for water and just food," Irizarry said.

In Añasco, just south of Mayagüez, flood waters engulfed homes along a small creek in the remote community. Homes filled with mud and residents' belongings were destroyed.

On Monday, they continued to clean-up, using wheelbarrows to remove the mud.

"If I leave all that mud in there and I don't clean it off, I'm going to lose the house totally. So the idea is to clean it out and wait for the outcome," said Maria Del Pilar.

"This is the third time that we put stuff out, we lost everything. Everything in total," said another resident Betty Santana. "We came out with what we had on.