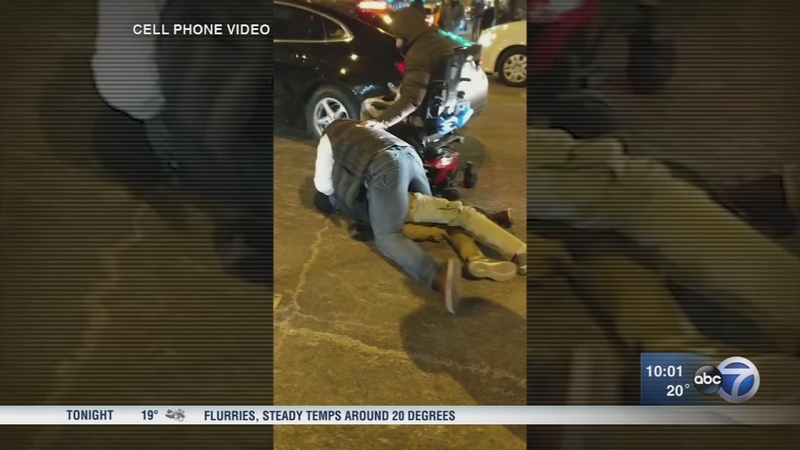 CHICAGO (WLS) -- ABC7 Eyewitness News was first on the scene when a would-be carjacker was taken down by the person who was nearly one of his victims in the city's Streeterville neighborhood.

ABC7's camera arrived as the alleged carjacker, who police said is 15, was held to the ground.

Sherry Randle owns the car that was nearly taken a little after 7 p.m. at East Ohio Street and North Fairbanks Court.

Randle and her boyfriend were checking into the DoubleTree Hotel and unloading luggage when a man jumped into their sedan.

"I ran to see where they were, and I can see them rolling into the intersection," she said.

But it wasn't a clean getaway. Randle's boyfriend fought back, yanking the suspect out of the vehicle and lying on top of him.

Witnesses said he appeared to have accomplices in a black SUV, and they tried to intervene.

"They kept trying to get the person that was tackled on the ground, and then a guy in a wheelchair came up and stood in front of the car and risked his own life," said a witness, who did not want to be named.

The black SUV sped away. Police arrived shortly after and handcuffed the suspect.

Before being led away, he seemed to have a warning for other hotel guests, calling out, "Don't be going in that hotel."

"I'm really thankful that people cared enough to kind of stop and help," Randle said. "Yeah, I am kind of shaken up about it. And it angers me. But I'm just glad everybody's okay."