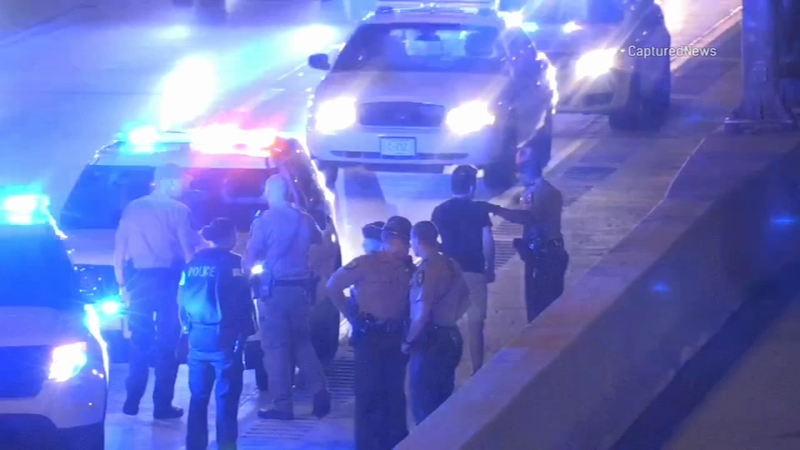 CHICAGO (WLS) -- Chicago police are looking for two thieves who carjacked a 32-year-old man and forced him to ride along with them Friday.

The victim managed to escape by jumping out of his moving SUV onto the Dan Ryan Expressway, one of the city's busiest highways.

The man, distraught and screaming for help, flagged down state troopers on the Dan Ryan near Pershing Road around 1:15 a.m.

He told them he jumped from the moving vehicle to escape two men who had stolen his Acura at gunpoint in Chicago's Brighton Park neighborhood on the Southwest Side.

Police said the armed suspects walked into the victim's garage in the 2700-block of West 38th Place after he pulled in and tried to rob him. When he told them he didn't have any money, they allegedly told him to direct them to people to rob.

All three eventually drove onto the expressway, where police said the man jumped out of the Acura's passenger seat.

"The amount of fear he must have had in order to do that... I don't know if I would have been able to do that myself. But I'm sure he was afraid for his life. The fact that he did that on the Dan Ryan is unbelievable," Mallory Zapata said.

"Was never worried about something like that. I've never heard of anything like that right here," Rick Bielski said. "Courageous. I mean, it was that or probably end up dead. So it was a good choice."

In another incident believed to be related, three men attempted to carjack a 42-year-old man in his driveway. One of the assailants fired several rounds, striking them man in the leg and elbow.

The victim in that incident was able to get back into his car and escape. He drove himself to the University of Chicago Medical Center for treatment.