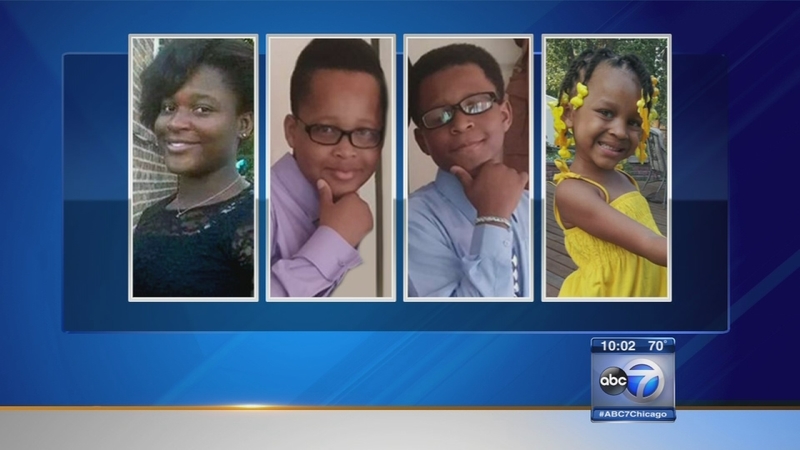 CHICAGO (WLS) -- An apartment fire claimed the lives of four children in Chicago.

People in the Roseland community turned out Monday night in support of the children's grieving family after the fire broke out early Monday morning at 112th and Vernon.

Shamaya Coleman spent the day in surgery after suffering multiple broken bones when she and her boyfriend had to jump from an upper floor. Her children, however, would not make it out alive.

Heartbroken loved-ones gathered at the scene of tragedy beneath the third floor apartment where four young lives were lost.

"All I can say is I'm going to miss my babies," said Carl Clark. "I love my babies. I love Liysi-poo. I love my Mari."

A growing memorial of candles and teddy bears, and a release of blue and pink balloons Monday night in honor of the siblings, 15-year-old Carliysia Clark, her 13-year-old brother Carlvon, 12-year-old brother Shamarion and the youngest, 7-year-old Eri'ana Smith.

Their fathers united in grief.

The fire broke out around 3:30 Monday morning in a largely-vacant second-floor apartment in the 18-unit building.

It's unclear who left the door open allowing the fire to spread. The flames raced upstairs where the children slept, trapping them in a bedroom.

Their mother, Shamaya Coleman, and her boyfriend Nate Johnson, were cut off from the kids, the searing heat forcing them to jump from the third floor.

"I saw a young lady laying on the ground, and she wasn't moving, and we heard the young man screaming for help. And so I called 911 and told them there was a fire," said resident Monique Hayes.

The children never made it out. The oldest, Carliysia, apparently died while shielding her baby sister. The two brothers also huddled together.

"Pray for my family. My sister has lost four of her children. We just need prayers," Monica Coleman said.

The cause of the fire is still under investigation. Neighbors say the family had complained for months about a back door to their apartment that wouldn't close, so maintenance placed a 2x4 across it. Fire officials, however, say that likely made little difference in the family's attempt to escape because the flames spread so quickly. Building management declined to comment.

A GoFundMe page has been established to raise money for the children's burial and services: http://www.gofundme.com/e8xib4.

The ABC7 I-Team found city of Chicago building records online that show the apartment building failed several inspections in the last nine years, including the most recent one, in June.

The 18-unit apartment building has been in court before for building code violations. In fact, the list of violations back to 2006 is 10 pages long. It has failed its last two annual inspections, and just three months ago, inspectors found 17 violations including missing smoke and carbon monoxide detectors. Fire officials say there were no working smoke detectors in the apartments where the fire started and where the fatalities occurred.

J & J Real Estate Management, the company that manages the apartment complex, said in a statement Monday that "our hearts go out to family members that lost loved ones and displaced families."

The cause of the fire is still under investigation, but it is not being called suspicious.