Carson contends he and his wife complained about $31,000 furniture cost 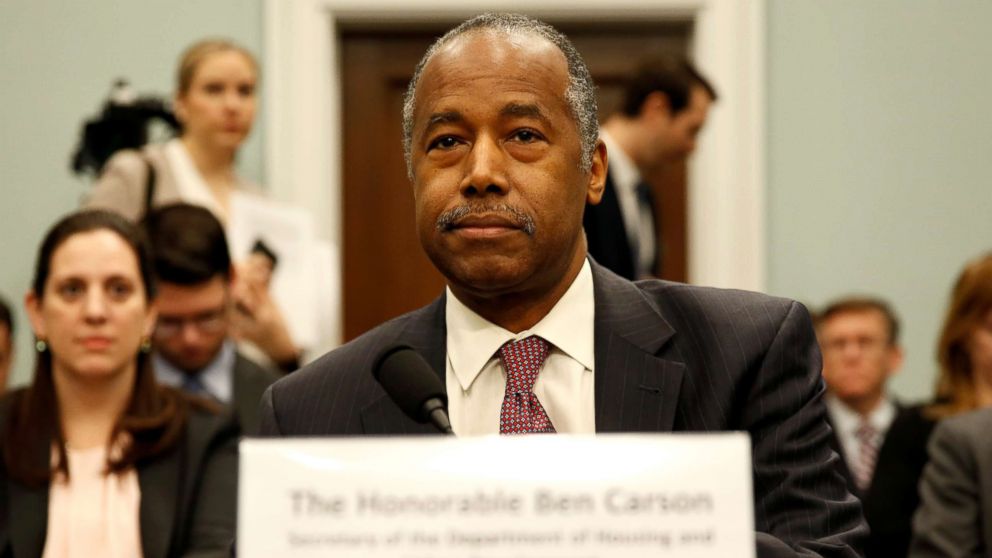 WASHINGTON, D.C. -- Housing and Urban Development Secretary Ben Carson spoke publicly for the first time Tuesday about the controversy over his agency's decision to order a $31,000 dining set for his office, contending he and his wife complained to staff about the price.

Answering questions from a congressional committee with oversight of the HUD budget, Carson acknowledged that he was involved in selecting a new dining set but said he asked his wife to help and then "dismissed" himself from the process.

"I was told that traditionally secretaries redecorate their offices, I came in I looked at it," Carson said. "You know I'm not really big into decorating if it was up to me my office would probably look like a hospital waiting room but at any rate, I invited my wife to come in and help me," he told the committee.

Carson gave more details about his and his wife's involvement in the department's decision to purchase the dining set, which has since been canceled. Carson told the committee that he asked his wife Candy Carson to help him select used furniture stored in the basement of HUD's headquarters to redecorate his office and later to help choose a new dining set.

"So your wife selected the furniture is that correct?" Rep. Katherine Clark, D- Mass., asked Carson.

"A style and a color was selected by her with the caveat that we were not happy with the pricing and they needed to find something," he said. "If anybody knew my wife they would know how ridiculous this was she's the most frugal person in the world."

He said he did not find out about the furniture purchase until it was reported in news articles, even though emails show that his staff knew the estimated cost of the order. Carson also said his wife is not involved in any other spending decisions at HUD.

The decorating expenses have been a subject of controversy after a whistleblower filed a complaint that she was pressured to approve spending to redecorate Carson's office that was higher than the $5,000 legal limit. That whistleblower, Helen Foster, says that she was demoted from her job as chief administrative officer at the agency in retaliation for raising concerns about the spending and other misuses of taxpayer funds at the agency.

Carson said he didn't know the whistleblower and wasn't aware of any retaliation.

Foster said in a message Tuesday that she briefed Carson on issues with spending at the agency last March.

Federal law sets a $5,000 limit to redecorate offices and says that any spending above that amount has to be reported to the House and Senate Appropriations Committees. In Foster's complaint, she says that she informed officials about this limit several times but that she was still pressured to approve more spending.

Carson said they only spent $3,500 to redecorate his office.

The department confirmed last week that Candy Carson was involved in selecting the table after agency emails were released referencing his wife's involvement in the decision.

Carson said Tuesday that staff told him they needed to replace the dining set because of exposed nails and chairs that might collapse and that it was a facilities decision to replace it, not a decorating expense. Carson also said he dismissed himself from the decision because he was busy with other issues and that he asked his wife to help make the decision.

"I left it with my wife I said help choose something but I said the money that is going to be used, we need to take care of the deputy secretary's office, and you know whatever's left over take care of the dining room furniture," he said.

There have been other concerns about the Carson family's involvement in HUD matters after Carson's son, Ben Carson Jr, participated in a listening tour of Baltimore despite a warning from department lawyers that it could appear as a conflict of interest. Ben Carson Jr is a businessman in Maryland. That decision is now under investigation by HUD's inspector general.

Diaz-Balart said in his opening statement that he wrote to the HUD inspector general and the Government Accountability Office asking them to look into the furniture purchase and other financial issues at the agency dating back to 2008. Foster's complaint also said that she reported $10 million from the agency's 2016 budget had been mismanaged by the person previously in her position, but that other officials at the department did not want to report the issue to the appropriations committee.

Carson said that he has directed the agency's new chief financial officer to create a plan for new financial controls and increased oversight of spending at the agency.

The committee's ranking member Rep. David Price of North Carolina described the furniture decision as one of multiple "major ethical lapses" at the department.

"Failure to control funds and provide legally required notifications to Congress is bad enough but what's even more disturbing are apparently false public statements that intended to obscure the truth about the secretary's involvement in this matter as well as the reassignment of the whistleblower who brought these problems to the public's attention. These mistakes are apparently compounded by roles that members of the secretary's family have taken at the department," Price said in his opening statement. "a public office is a public trust, even the appearance of impropriety can damage our institutions."