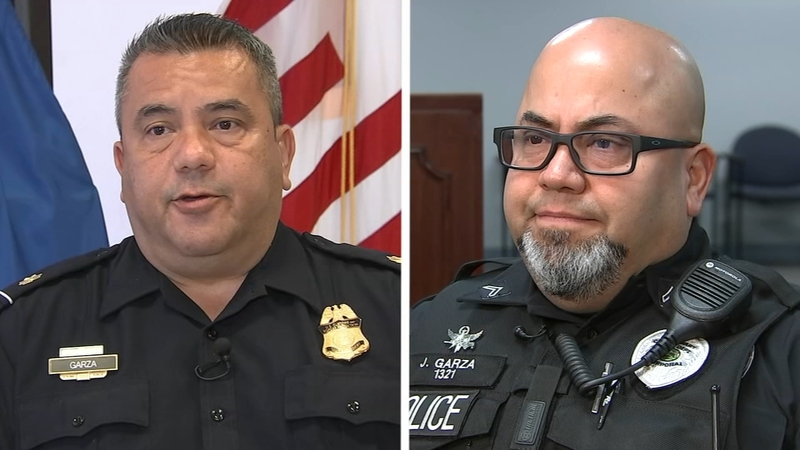 GARY, Ind. (WLS) -- One family is fighting a brutal battle against illegal drugs and cartels. Two brothers, separated by more than 1,300 miles, have one mission: find and stop deadly narcotics from hitting the streets.

Joe Garza is a Customs and Border Protection officer in Laredo, Texas. His brother Javier Garza is a Gary police corporal.

Joe is with his team fighting drugs, guns, and people trafficking at the border with Mexico in Laredo. His younger brother Javier fights that same fight on the streets of Gary, Indiana. It's not an easy task.

Agents and officers working at the border enforce US immigration laws, and are tasked with keeping drugs and terrorists out of the country.

"The amount of traffic we have for the port of Laredo is huge," Joe Garza said. "I mean it's huge. There's no way we can check everyone. But it something we're trying our best to stop."

There are four major bridges into Laredo from Mexico. Ten thousand people come by foot over the gateway to the America's Bridge every day. The other three bridges funnel thousands of vehicles to and from the border.

Specifically, the World Trade Bridge is the busiest port of entry in the Western Hemisphere for tractor trailers. More than 7,000 commercial trucks come through there per day, and it's where customs officials say cartels are playing a numbers game.

"They know that we can't check all 7,000 trucks 100 percent. We just can't. The amount of traffic that crosses through here the amount of personnel it's just going to be difficult," said Javier Vasquez, Asst. Port Director for Trade Operations, Port of Laredo.

The Sinaloa cartel and others find new ways to pack and hide narcotics, like cocaine and heroin, deep in hidden compartments inside of vehicles. Customs and Border Protection is working to fight back.

They use tools like a massive imaging system to scan vehicles, something officers say will be rolled out to all semi-loads in three to five years.

They also search some loads by hand, using dogs to sniff for drugs with big hauls, from kilos of cocaine, to methamphetamine hidden within wax candles, to drugs wrapped in bags of meat.

"These drug cartels operate like a fortune 500 company would you know they make millions and billions of dollars a year doing what they do," said Alberto Flores, Acting Port Director at the Laredo Point of Entry.

Coke, meth, fentanyl and heroin, all on their way north.

Rey Cavazos, from East Chicago, Indiana, is a chief customs officer. He said vehicle searches by hand are vital. And the focus isn't just on those headed to the US.

They're also checking what's going into Mexico. Smugglers send guns and money south to the cartels.

Back on the U.S. side, if and when drugs get past the first and secondary checkpoints, people like Joe Garza's brother, Javier, with Gary Police Department, are another line of defense.

"He will tell me how people will hide drugs in vehicles. I will try to pass it on to other officers and stuff like that," Javier Garza said.

"We always correspond together and I'm always telling him you know what to watch out for. He needs to be careful, because he's out there," Joe Garza said.

"We see the drug use we see the drug sales we see what it does to people how it destroys their lives," Joe Garza said. "When we were out here we just stay positive and hope that you go home that day."