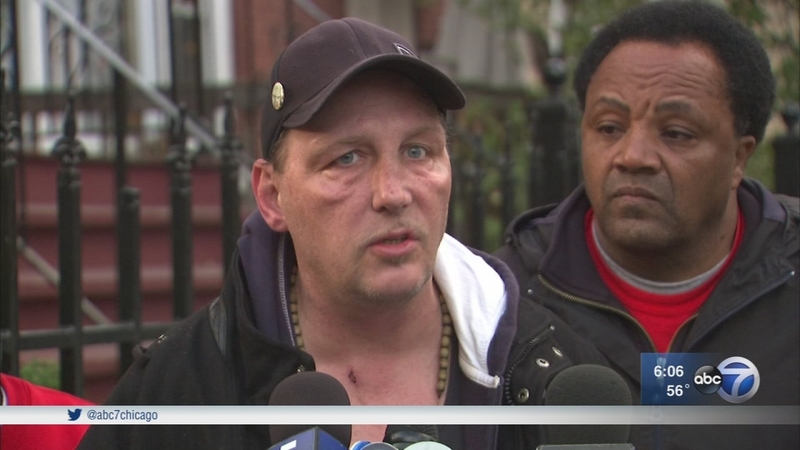 West Side beating caught on video

CHICAGO (WLS) -- A Donald Trump supporter who was beaten by a mob of teenagers in a Chicago intersection said he didn't fight back for a reason.

Victim David Wilcox retreated and curled up into a ball, but not because he was afraid of being hurt. He told the I-Team that he was terrified of fighting back and going to prison where he has spent many years of his adult life.

The video of the beating was seen by millions around the world, but this is the first time we learn the back story.

After the incident, Wilcox told the public: "I'm not a violent person. I haven't been in a long time."

On Monday, he explained to the I-Team what he meant.

Wilcox said he hasn't been violent since what happened in Chicago's Sauganash neighborhood in August 1986, the last time Wilcox was attacked on a public street.

He was 20 years old at the time and outside a house party on Kenneth Avenue, Wilcox said he and his 16-year-old pregnant girlfriend were attacked by several men he'd been feuding with.

"He ran up on me with a baseball bat and beat up on me" Wilcox told the I-Team on Monday. "I stabbed the guy and he died...They were aggressors. They started the fight."

Wilcox was convicted of murder and sent to Stateville prison after he was sentenced to 20 years. He served nearly seven-and-a-half years after an appeal dropped the charge to manslaughter.

"I'd rather get stabbed and die than go back to prison," Wilcox said Monday.

For Wilcox, it wasn't just one experience in prison that has him fearful of being locked up again.

According to Illinois Department of Corrections officials, he's been in state prison nine times in the past 30 years. His was arrested for retail theft and, in 2013, faced a marijuana charge in Cook County.

When last week's traffic altercation grew into a Trump-bashing incident, Wilcox defended himself by retreating and later explained the incident just as he explained the 1986 killing he was involved in.

"She was the first one who threw a punch," Wilcox said.

As the punches landed, Wilcox was dazed because he had prayed to god to never put him in a violent situation again.

And if those who beat him last week are ever arrested, his hope for their punishment comes from experience:

"I'm gonna be at every court date and I'm gonna make sure I can do everything I can to where they get locked up," Wilcox said.

He would like to see them locked up in the kind of place where Wilcox says he was -- in Stateville, where in the 1980s he says white inmates were unwelcome guests, adding that he has PTSD from his days there.