Man tried to set off bomb at Panera Bread but failed 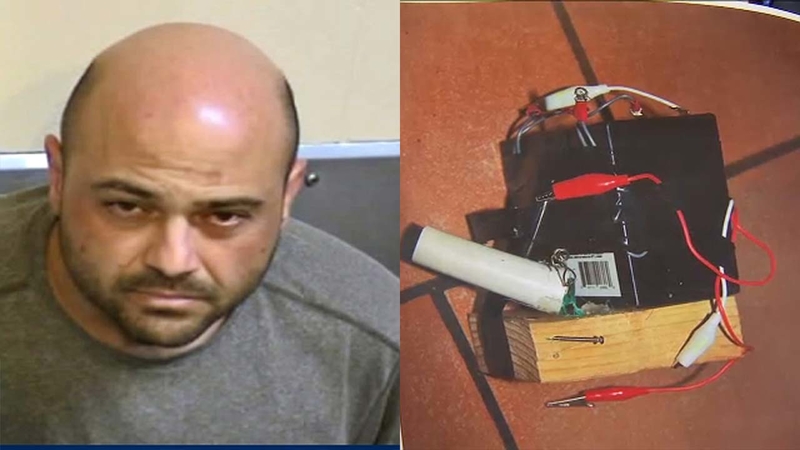 FRESNO, Calif. -- A Fresno man is in jail after police say they discovered bomb-making materials at his home and then later arrested him inside a Panera Bread restaurant with a homemade explosive device in his possession.

Detectives are now taking a closer look at the man responsible for the chaos - Chad Mazgedian.

"(It is) very fortunate (that) for whatever reason this device did not go off inside the business and fortunately no one was injured," said Fresno Police Chief Jerry Dyer.

When they found the 43-year-old later in the day, there was a short pursuit.

Mazgedian eventually crashed his vehicle and ran into the Panera Bread near Shaw and Marty.

Authorities evacuated nearby restaurants and businesses where the arrest took place

"One of the officers tackled him inside the Panera Bread and handcuffed him and when they brought him to his feet this device fell out," said Dyer.

Bomb Squad investigators are still working to determine the potential danger of the device but know Mazgedian planned to set it off.

"We did hear the suspect make a comment that he had attempted to detonate this device inside Panera Bread but was unable to do so because it had some type of malfunction," Dyer said.

Mazgedian told officers there was a second bomb inside his car but that claim proved to be unfounded.

"Very possible that device fell out or he never had that secondary device. We also located a shotgun shell on his possession. He made a statement that was for him that he was going to take his life with that," Dyer said.

Mazgedian is a former insurance agent but is well known to law enforcement.

He was already wanted for violating a domestic violence protective order before Wednesday's incident.

"Obviously his relationships had gone south because he had a domestic violence charge, a stalking charge as well as elder abuse. And (in) addition to that we knew he had the potential to make some type of explosive device that could kill himself or kill others," Dyer said.

Mazgedian was issued a concealed carry gun permit in 2014 but the Sheriff's Office found him to be in violation and revoked the permit in 2016.