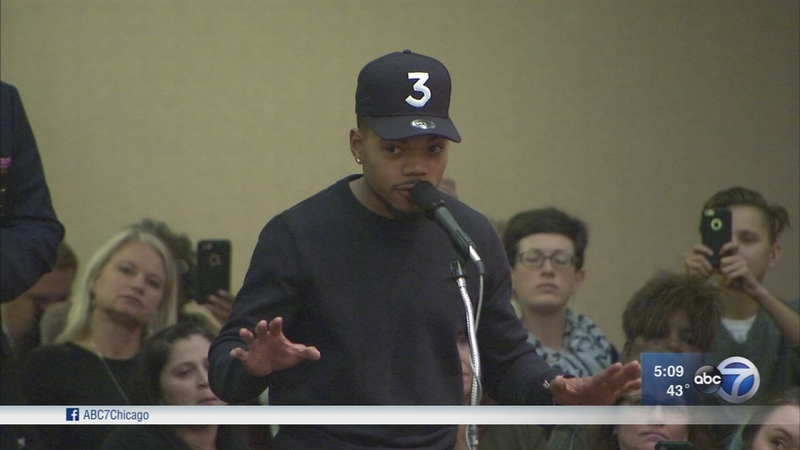 The Grammy Award winning rap artist used his celebrity and his allotted 3 minutes to urge aldermen not to fund academy. He stands with a group of 40 community organizations called the No Cop Academy Coalition, which opposes Mayor Rahm Emanuel's $95 million plan to purchase the land and build the academy.

Despite the opposition, with a vote of 48-1, the City Council approved a $10 million down payment to pay for the land.

Chance argued that the city could use the money for other things, such as funding schools, job training and social services.

During public comment, Chance said: "I've been asking for money for over a year now to fund these classrooms and on Fourth of July weekend they announce, in a cool finessing way, that they have $95 million, or that they are proposing to build a $95 million cop academy. ... What else can I say? What is ya'll doing?"

"When they tell us we can't fund school and they close the schools because they're broke and then they come up with $95 million to build a police academy in that same area ... that's not right," said Lottie Steal, of the Bocks Together community organization.

The mayor was not present while Chance spoke. Emanuel says he stepped out to call to his mother to wish her a happy birthday.

"I guess the mayor had to step out when I came, but it's cool. I'm here to talk to you guys," he said.

The academy will be built on a 30 acre piece of land that has sat vacant for 40 years. Some hope the new facility will spur much needed economic development in the West Garfield Park neighborhood.

"He don't live here and he don't know what I go through day in and day out to make a difference," said Ald. Emma Mitts, 37th Ward.

While Mitt acknowledges Chance has given lots of money to schools in her ward, she says he is wrong on this issue.

"I don't want see our kids learning in hallways or stairwells, but that doesn't mean our police and fire have to be in facilities 40 years old," said Emanuel.

The mayor added that the city has and will continue to spend money on schools. He said part of academy will be paid for by selling the current police and fire training facilities. However, the project remains about $37 million short.