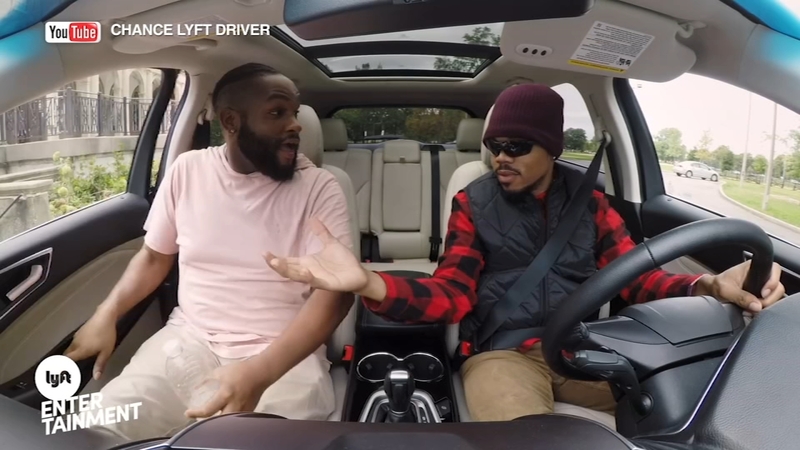 CHICAGO (WLS) -- Chance the Rapper partnered with Lyft to raise money for Chicago Public Schools, and went undercover as a ride-share driver to surprise unsuspecting residents around the city.

Hidden cameras show Chance picked up passengers while wearing a knit cap and sunglasses to disguise his appearance. They chatted about the city, life and music, and cracked jokes until they reached their destination.

Chance The Rapper continues to show his support for Chicagoans in need. Thursday he pledged $1 million for mental health in the city.

That's when Chance swapped the beanie for his signature 3 cap and took off the sunglasses, shocking his riders as they found out who they'd been talking to the whole time.

Desiree Hemphill-Davis was one of those riders. When she opted in to "round-up-and-donate" in her Lyft app a year ago, she never thought it would lead to what has become the "ride of her life."

"A lot of my friends, I think, are going to see the video and say, 'There's no way you could not have known,' but I definitely did not," Hemphill-Davis said.

One of Chance the Rapper's undercover Lyft passengers describes what she called the 'ride of a lifetime.'

A few weeks ago, Hemphill-Davis got into a Lyft and was introduced to a driver named "John."

"Just talking about what it was like growing up in Chicago and our shared experiences, hopes and dreams, that sort of thing. Then we started talking about local music," Hemphill-Davis said.
Little did she know, "John the Driver" was actually Chance the Rapper.

"He takes off his hat and says, 'Well I'm Chance the Rapper' and I just kind of lose it at that exact moment," Hemphill-Davis said, laughing.

"People can round-up-and-donate and then give back to CPS through our new Chance Fund," said Essence Smith, of Social Works.

RELATED: Chance the Rapper hosts party at Field Museum to help the homeless

SocialWorks donates money for arts education to Chicago schools in need. The New Chance Fund, which SocialWorks launched at the beginning of the 2017-2018 school year, will help 20 CPS schools give kids better access to enrichment programs during the school day.

Google teamed up with Chance the Rapper to bring computer science education to Chicago Public Schools.

Hemphill-Davis was one of the riders who opted in to donate to Social Works.

Lyft officials said on average, each rider donates a few dollars each month. Since the partnership between Lyft and Social Works began, the nonprofit has raised more than $100,000 for CPS students and programs.

Click here for more information about Round Up and Donate.

Click here for more information about The New Chance Fund.