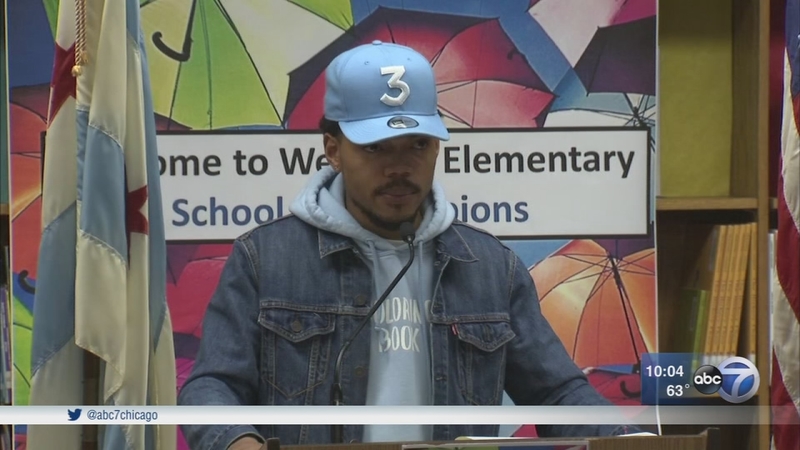 CHICAGO (WLS) -- Chance the Rapper donated $1 million of his personal money to the Chicago Public School Foundation, which he announced at a Monday afternoon news conference following a meeting with Illinois Gov. Bruce Rauner last week to discuss funding options, which he described as "vague" and "unsuccessful."

"Our kids should not be held hostage because of political positioning," Chance said at the press conference at Wescott Elementary school.

The rapper, whose real name is Chancellor Bennett, said he spoke to the governor several time over the weekend as well, equally unsuccessfully. A product of Chicago Public Schools himself, Chance returned to his hometown following his three-Grammy win to try to use the weight of his fame, as well as the funding from it, to help the cash-strapped public school system.

"As a CPS graduate, Chance has shown Chicago students not only the heights they can achieve but the generosity they can share. We also appreciate his strong advocacy for Chicago schoolchildren, who suffer under the state's racially discriminatory system of funding, which Gov. Rauner continues to perpetuate," said CPS spokeswoman Emily Bittner in response to the donation.

Former first lady Michelle Obama also tweeted out her thanks and admiration.

Thanks @chancetherapper for giving back to the Chicago community, which gave us so much. You are an example of the power of arts education.

Chance also called upon private businesses and corporations to donate money to the school system, saying that for every $100,000 in donations he will donate an additional $10,000 to individual schools to further support arts education.

Ima wait til tmw to start announcing Chicago public schools that are receiving 10k BUT YOU CAN HELP us here https://t.co/8rOIFuczrj

"The check that I donated is a call to action. I'm challenging major companies and corporations Chicago and across the U.S. to donate and take action," he said.

Chop Shop, a restaurant/deli/butcher in Wicker Park, quickly took him up on the challenge, announcing they would donate $1 from every sandwich sold this week to the Chicago Public Schools Foundation.

"Being a small, independent business we might not be able to do the Chance the Rapper dollar, but we do what we can," said Mario Minelli, co-owner of Chop Shop.

"Seeing him and what he has done with his career so far... They can be and do anything," said Kenna Austin, CPS parent.

CPS is in danger of not having enough money to finish the school year, and thus having to end it 13 days early.

Earlier, Rauner's administration circulated a memo with options for funding Chicago Public Schools after meeting with the Grammy-winning artist on Friday.

The memo outlines two options for the nation's third-largest school district to receive $215 million in pension relief Rauner vetoed last year. The cash-strapped district had factored the funding into its annual budget. Rauner said it should've been tied to larger pension reforms. The State Supreme Court has twice rejected efforts to reform Chicago's pension system in the past two years. Rauner has not specified how his desired pension reforms would differ from the ones ruled unconstitutional.

A CPS spokesperson responded to the plans, saying:

"Yet again, Governor Rauner is perpetuating a racially discriminatory state funding system and his so-called plan actually demands that Chicago students do more to get the same funding that every other student in the State of Illinois is entitled to receive - a gross disparity that has no place in 2017. Chicago residents stepped up and are paying $342 million more in taxes this year alone to support schools, and it's past time for the state of Illinois to end the racial discrimination that is creating a separate and unequal funding system."

CPS is suing the state, claiming it racially discriminates against the district's predominantly black and Latino students, who make up 20 percent of Illinois public school students but receive only 15 percent of the money the state appropriated for education.

A Rauner spokesperson said, "Both personally and through the Rauner Family Foundation, they have donated more than $7 million over the past 20 years directly to organizations benefiting Chicago Public School students."

Rauner and Chance met Friday to discuss CPS funding after the artist asked for a sit-down. He attended city schools.