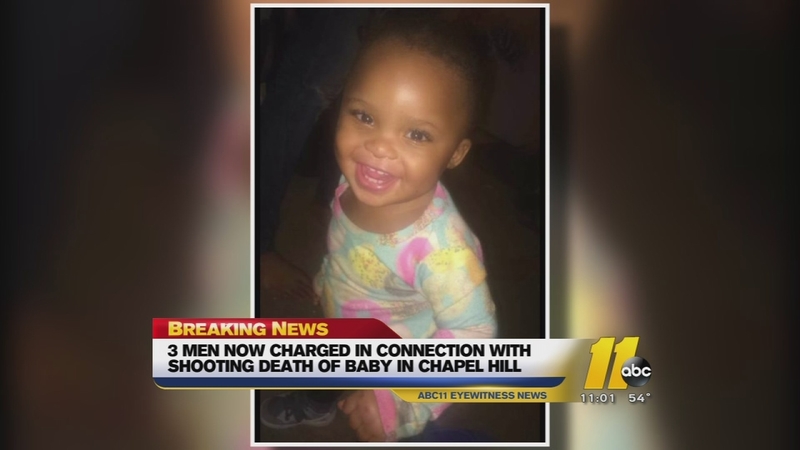 CHAPEL HILL, N.C. -- UPDATE: Authorities announced Monday evening that two additional arrests have been made in this case. Ramone Jamarr Alston, 22, was arrested by the U.S. Marshals Joint Fugitive Task Force on Monday afternoon. Alston has been charged with first-degree murder in connection with the shooting. Alston was arrested without incident in the 600 block of Jones Ferry Rd in Carrboro.

Both suspects will be confined in the Orange County Jail and bond has been set at $1 million secured.

ORIGINAL STORY: A 1-year-old girl hit in the head by gunfire on Christmas has passed away according to family members. Maleah Williams had been in critical condition at UNC Children's Hospital.

The shooting happened around 5:40 p.m. outside Maleah's godparents' apartment in the 700 block of Trinity Court in Chapel Hill.

"Maleah is such a sweet baby, we all love her," said Melita Scott, who lives in the apartment above where the shooting happened. "We've been with her mom since she was pregnant with her. She's got a beautiful smile and beautiful eyes."

The shooting happened in a tight-knit apartment complex, where everyone knows everyone and they all loved Meleah.

"She was such a beautiful baby," said Erin Leak, a family friend. "You can't have a bad day when Maleah is around. She was everybody's baby. We were here when her mother, Tylena, was pregnant and trying to figure out names. She was so beautiful and she had everybody's support; everybody loved her."

Police charged 22-year-old Shaquille Oneill Davis with attempted first-degree murder and assault with a deadly weapon in the shooting. Those charges will likely be upgraded.

Davis appeared before a judge Monday where his bail was held at $650,000.

Davis was captured soon after Maleah's mother called on him to turn himself in.

ABC11's cameras were rolling when Davis apologized to the family after he was taken into custody.

The emotional and desperate plea for justice came from Tylena Williams and her family outside UNC Children's Hospital.

Through sobs, Williams described what happened.

"And he just started shooting and I started running," Williams said. "I felt my body being so warm and my baby was just bleeding so much and gasping for air and I kept telling her I love her-please don't leave me."

Erin Leak said she was one of the first to run outside after the shooting and quickly tried to help. "I got outside and the first person I saw was Tylena and she just looked at me and said take my baby. And she put Maleah in my arms and she was so limp at first and she moved and grabbed on to my shirt and held on so tight."

"I'm pissed," said Leak. "You put all these children in danger for what? there's no point or explanation or sense for anything that you did. I'm pissed because Maleah was out here. She was the youngest child out here."

Maleah's mom said the bullet that went through her daughter's head wasn't meant for the infant- a happy little girl adored by everyone.

"You rode right by all them kids," she said. "You knew there was a chance so why would you even do that? Now she's up there fighting for her life and it is killing me."