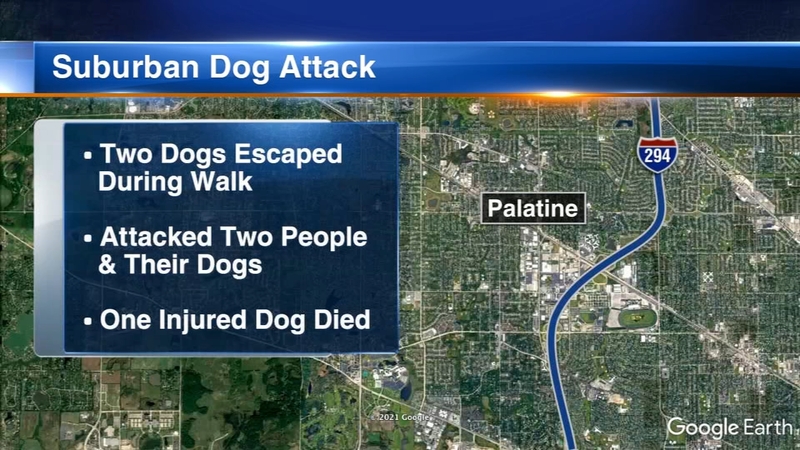 Police said in a Facebook post that a woman was walking a pit bull mix and Akita mix on a leash about 6:50 p.m. near the 200-block of West Washington Street when the dogs got away from her.

Both of the injured people are expected to be OK, but one of the dogs that was attacked has died.

The owner of the two attacking dogs, Meleina Teodoro, 22, of Palatine, was cited for 13 ordinance violations. The charges include dogs running at large, biting of persons and biting of other animals, according to police.

Police also arrested Julia Paulino, 32, of Palatine. She was walking the attacking dogs and is a relative of Teodoro. Paulino is charged with four counts of reckless conduct after the investigation revealed she had failed to secure the dogs on a proper collar.

The Palatine Fire Department treated the injured dog owners, who were taken to Northwest Community Hospital for non-life threatening injuries. The first white dog that was bitten was treated and transported to Golf Rose Animal Hospital by Palatine police, where it later died. The second bitten dog was also transported for bite wounds. Police said it was still alive later Monday night.

Both the pit bull and Akita were current on their rabies vaccinations, police said.

Both attacking dogs were taken into custody for observation and sheltered at Golf Rose Animal Hospital, according to police.