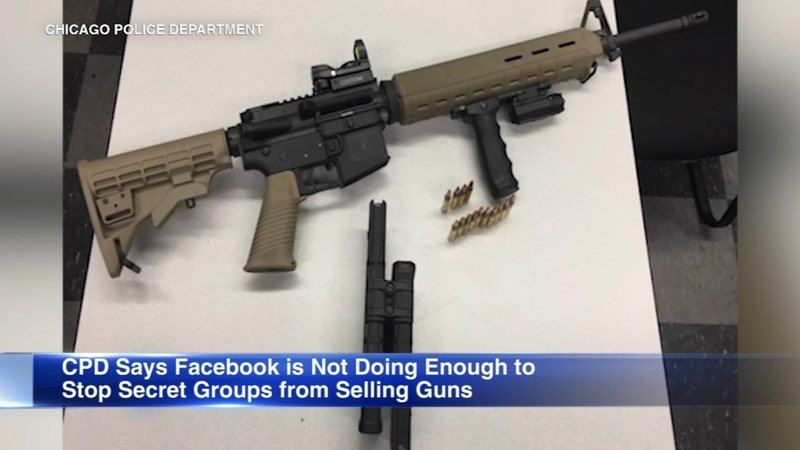 "CPD has been able to infiltrate seven of these groups in the latest operation, resulting in 147 undercover buys," said First Deputy Superintendent Anthony Riccio.

Police showed pictures and videos of guns they were able to confiscate during the sting operation, including automatic weapons. According to Riccio, Organized Crime detectives have been digitally going undercover by posing as criminals looking to buy illegal guns and drugs sold in private or invisible Facebook groups.

Officers were able to use real confidential informants who would vouch for a detective posing as a gang member in the group, he said.

The parties would then complete the purchase in person and officers would make an arrest.

CPD's top brass said Facebook is harboring criminals because they aren't doing enough to close the private groups down. Officers also said Facebook is making these operations difficult for undercover detectives by shutting down their fake accounts.

"All it would take is allowing us and other law enforcement agencies to work with Facebook, just like we work with neighborhoods or businesses to stop the sales of illegal guns," said Interim Supt. Beck.

"People who are doing illegal acts under their own identities, Facebook doesn't shut them down, but when they find out officers are operating undercover with covert identities Facebook will shut those officers down," Riccio said.

In a written response to CPD complaints, Facebook company spokesperson Sarah Pollack said in part, "We remove content and accounts that violate our policy and catch over 97% of drug sale content and 93% of the firearms sales content." But, CPD insists there are many more illegal sales going undetected on hidden Facebook groups.

RELATED: More than 10,000 illegal guns have been recovered by police this year, CPD says

Last week, Chicago police announced that more than 10,000 illegal guns have been taken off city streets so far this year. That's equivalent to roughly one gun taken off the street every 48 minutes.

One day after Supt. Eddie Johnson was fired by Mayor Lori Lightfoot, interim Supt. Charlie Beck said that he believes accountability is key when being a police officer.

"None of us are perfect, we have to live with our errors," Beck said.

Beck, whom Lightfoot appointed last month, didn't speak for long at Tuesday's press conference, but said he wanted to ensure members of CPD that this would continue to be a smooth transition for leadership.

"This is not at all how I envisioned the transition, but, this will not deter the transition," said Beck. "Superintendent Johnson and I will still talk, we have talked and he has the best interest for this city."

Beck sent a letter to CPD officers saying in part he realizes "Johnson's firing probably caused a great deal of unease but the Department is strong and headed in the right direction". Beck's letter also praised CPD for a "crime strategy that has delivered nearly a 40% percent drop in gun violence over the last four years" while acknowledging there is still a tremendous amount of work ahead.

"I believe I have some things I could bring to the table from a different perspective having policed another city for a very long time," said Beck. "But that is not to take away from the success that this department has had."

"I know that superintendent Johnson would want a smooth transition, and that's what I'm looking for also," he added.

I wanted to take a moment to reach out to the sworn and civilian members of the Chicago Police Department this morning to let you know that it is an honor and a privilege to have this opportunity to serve as your Interim Police Superintendent. I know that the events of this morning likely caused a great deal of unease, but rest assured this Department is stable, strong, and headed in the right direction.
I served as a police officer for more than 40 years in Los Angeles, and was their Police Chief for nine of those years. I come from a police family. My father came to the Los Angeles Police Department in the 1950s, and all three of my kids are on the job in LA today.