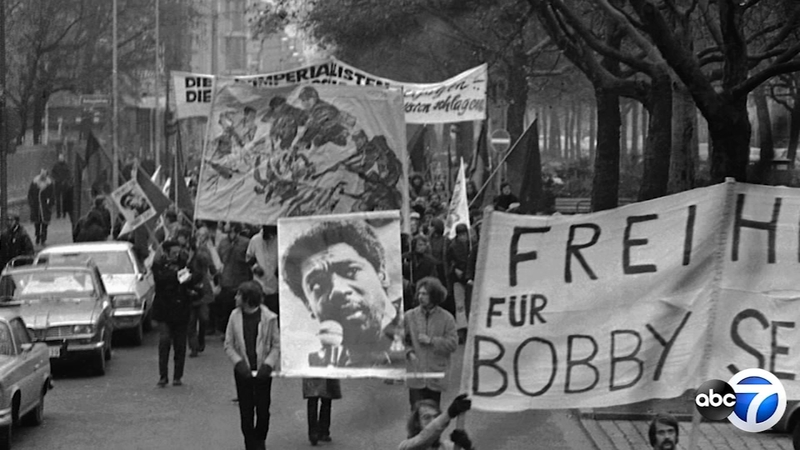 CHICAGO (WLS) -- 1968 will forever be remembered as a year of conflict and heartbreak.

And this year marks the 50th anniversary of a trial that shook the city of Chicago and tested the limits of free speech in America - The Chicago 7 Conspiracy Trial.

In the fall of 1969, tensions had reached a boiling point over the Vietnam War as Chicago prepared to host the Democratic National Convention.

Politicians, activists and protesters from around the country came to Chicago to talk about the party's platform, including the stance it would take on Vietnam. And two groups, The Mobilization to end the war in Vietnam and the Youth International Party, decided they were going to make a statement.

"They started applying for permits long before the convention, they wanted to have this Festival of Life in Grant Park and Lincoln Park," Fritz said.

But that's not what happened.

"It erupted into mass demonstrations because they refused to give them permits to let the people stay in the park," Fritz added. "So at 11 o clock every night the police would march into the park and the riots would start."

There were riots every night during the week of the convention. Soon enough, police eventually arrested eight men who they believed spearheaded them. The men were Abbie Hoffman, Jerry Rubin, David Dellinger, Tom Hayden, Rennie Davis, John Froines, Lee Weinder and Bobby Seale.

All eight were indicted on conspiracy and crossing state lines to incite a riot.

"Chicago 7, this was not riff-raff," Rubin said. "Half of them came from major universities. They were well educated, they came from middle-class families, most of them."

For five months they were on trial defending their innocence. But they weren't going to do it quietly.

"As the trial progressed it became more of a very circus-like theatrical atmosphere. The defendants did this purposefully so that people understood how ludicrous this trial was, to begin with," Fritz said.

"I remember some of the antics being in the newspaper, the pig and Jerry Rubin and Abbie Hoffman being very disrespectful," Rubin added.

One of the most memorable scenes from the trial is probably Bobbly Seale being bound and gagged, per Judge Julius Hoffman's orders.

"They brought him back into the courtroom and Bobby Seale still kept disrupting, he could make noise, he would move the chair, he would do everything just to upset the courtroom," Fritz said. "It was horrific, it was a horrible scene, and the headlines were all over the newspaper."

They decided to reach a compromise verdict. They were found innocent in conspiracy, but guilty on crossing state lines to incite a riot. Partially because of the evidence that was submitted, even though it was obtained illegally.

"There was mace which was made out of a tin can full of concrete," Rubin said. "It was a weapon you would throw around.

There was a molotov cocktail and a box that contained a nail clipper and some random nails.

Five of the seven men were initially sentenced to five years of jail time plus a $5,000 fine. But two years after the trial, the Seventh Circuit Court of Appeals threw out all five convictions.

The court found that Judge Hoffman had a bias against the defendants. They also found that the FBI had bugged the Chicago defense attorney's office, while Judge Hoffman and the prosecutors knew.

As a result, all five men walked away, free.