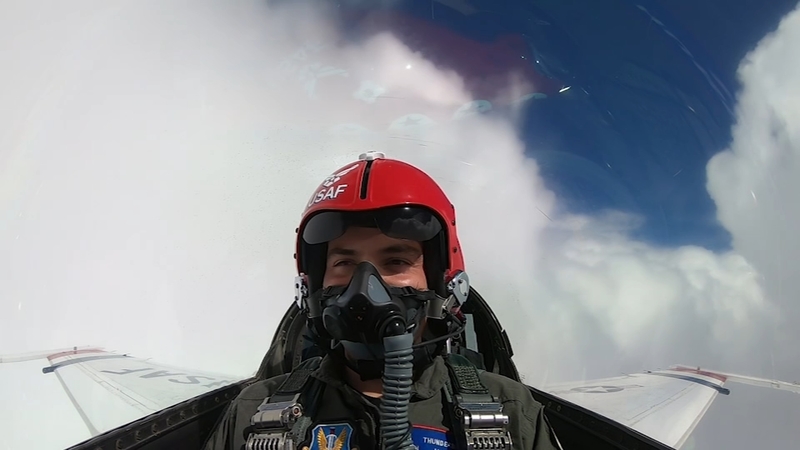 CHICAGO (WLS) -- It's a once in a lifetime chance to fly like a top gun. Weekend anchor Mark Rivera got an extremely fast and exciting look at the Chicago area from the air Friday.

Air Force Major Brendan Felker, Thunderbird 8 pilot, callsign "ASH" was assigned to fly with Mark in an F-16 fighter jet. It can go a thousand miles per hour without breaking a sweat.

"The F-16 is a very maneuverable very agile aircraft. It's a joy to fly. I've been flying it for six years now and I love it," Felker said.

It's an unbelievable experience climbing into an Air Force fighter jet with your name on it.

"(You hang) from your straps because you were at negative 1G and then we start with negative 1G again," Maj. Felker said.

An hour after takeoff they finally touched down and Rivera thanked the Thunderbirds. You can see them at the 60th Chicago Air and Water Show this weekend.
EMBED More News Videos

With planes in the air, and playing on the ground. It's a great day to be a kid. Leo Ramirez is playing with his grandpa. For all you grandparents out there, you can probably relate to this...
EMBED More News Videos

"They're good kids, they're a lot of fun. But that's why young people have kids. I can go for a few hours," said Bob Wheelhouse, Leo's grandfather.

Ryan Bellen is 4 and his brother Ben is 6. They're also hanging out with their grandpa and have been watching the skies all day.

Whether mom is cuddling you, or you're walking hand-in-hand with your family. This experience started in 1959 for every child.

At North Avenue Beach Friday, the contagious laughter of 89-year-old great grandma Rita Ritchie was heard. She was checking out the show with her daughters, Barbara and Kathy.

"We've been coming since they were little kids....and she's a grandma now. They both are," Ritchie said.

In fact, hundreds of people are here. And what you see can be surprising - and it's not always in the air.

"You literally have it all here. This was done months ago before the Air and Water show. It really has nothing to do with it. But here we are. I'm on camera and that's that," said Jack Campbell.

Campbell is a firefighter and the tattoo is a tribute to his grandparents. It just happens to be a boat and a plane.

If we can rub it in a bit, today was the perfect time to watch.
EMBED More News Videos

So whether you're here for your first time...

"I thought it would just be planes flying by... but they are actually going by a couple times and twisting and turning," said first time air show attendee Julia Grotthuss.

"My second time. I was here when I was like 4. It's really cool to see the planes. My favorite part was the helicopter. The rescue mission they did. That was cool," said Jon Pilkington.

It's time to run and play, or maybe just kick back in your stroller like Avyn Perez. After all, who says the Air and Water show has to be the end of the party?