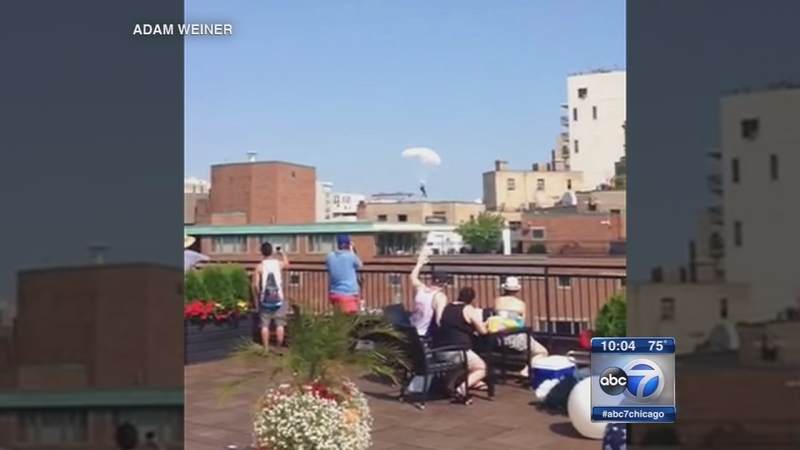 CHICAGO (WLS) -- Two skydivers are hospitalized after a mid-air collision during the Chicago Air and Water Show Saturday morning.

A U.S. Army Golden Knights jumper in his 20s remains in critical condition Saturday night at Northwestern Memorial Hospital after crashing into a building in the 1400-block of N. Lake Shore Drive following the collision. He underwent a procedure to reduce swelling in his head Saturday afternoon.

A U.S. Navy Leap Frogs jumper will spend the night at Northwestern Memorial in stable condition with a lower leg fracture after landing near North Avenue Beach. The 29-year-old stationed in California is expected to make a full recovery.

It appears that the skydivers were performing a maneuver called "bomb burst," which includes a mass exit, when they collided in mid-air.

"We heard a noise in the sky, my girlfriend and I," said witness Daniel McSweeney. "We saw a reserve chute, didn't know what that means at the time. It was really scary. He was coming in really low and appeared to be motionless."

At first, McSweeney said he thought it was part of the act. The parachutist was coming in so low, he said he and his girlfriend waved.

"Just cleared the top and then we heard contact," he said. "He clipped it and at that point, really tragic. He fell about 30 stories. We got there right in time and called 911."

Bystanders said they did what they could to help and keep the Army skydiver alive until paramedics arrived several minutes later.

The parachute jumps for both the Army and Navy have been cancelled for Sunday.

An investigation into what led to the collision is underway.