Air and Water Show 2019: What you need to know - from performers, viewing sights, parking and facts 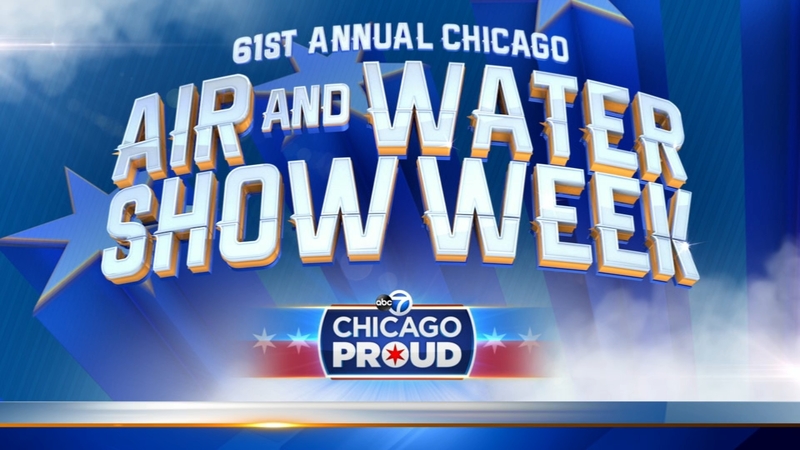 CHICAGO (WLS) -- It's a yearly event you won't want to miss. The 61st Annual Chicago Air and Water show is this weekend and is the largest and longest-running free show of its kind in the United States.

On August 17 and 18, nearly 2 million spectators will look to the sky for some of the most amazing air performers, including the world renowned Blue Angels.

WHAT YOU NEED TO KNOW:

HOW TO WATCH: The show can be viewed along the lakefront from Fullerton to Oak Street, with North Avenue Beach as the focal point.

PARKING: Parking will be available at the Millennium Parking Garage and Millennium Lakeside Garage with free shuttle to and from North Ave. Beach. You can pre-purchase parking at MillenniumGarages.com.

WHAT TO BRING: Be sure to grab your sunscreen, sunglasses, bottled water, ear plugs and binoculars before heading out.

Headliners include the U.S. Navy Blue Angels, who have been astounding audiences since 1946 with their commanding presence and aerial maneuvers in their F/A-18 Hornet. This elite group of Navy pilots defy gravity with their famous diamond formation and precision flying. Their most famous maneuver, the Diamond 360, brings all six planes as close as 18 inches apart. The U.S. Army Parachute Team Golden Knights will also be a main performer, jumping out of an aircraft at 12,000 feet and exceeding speeds of 120 mph before landing in Lake Michigan below.

The Blue Angels are showing off their precise formations and speed drills in Gary, Indiana, before the Chicago Air and Water show kicks off this weekend.

The Royal Air Force Aerobatic Team - Red Arrows, who have defended the skies of Britain and projected Britain's power and influence around the world, will be the special honored guests.

Performers are not listed in order of appearance and the schedule will be decided the morning of the show by the pilots.

FUN FACTS:
Majority of the planes flying in the show will take off and land at the Gary Jet Center in Gary, Indiana, while some military planes fly in from bases around the Midwest.

In 1959, the show cost $88 to put on. Today, with the help of corporate sponsors like ABC7, Shell, Boeing, American Airlines, WBBM Newsradio, The Chicago Tribune, Oracle among others help to make the show possible and FREE to the public.

CTA, METRA AND OTHER TRANSPORTATION:

Metra is also providing extra trains on the BNSF, Union Pacific North and Union Pacific West lines. Metra is also expanding passenger capacity on the Metra Electric Line to accommodate the large number of people traveling to the city's shoreline. Weekend passes will be available for $10 which includes unlimited rides on Metra Saturday and Sunday. Up to three children 11 and under are able to ride free with each adult through Labor Day. For more information on the expanded services and full schedule for each line, visit metrarail.com.

Once downtown, a variety of connections provide easy access to the lakefront. Customers disembarking at Chicago Union Station or Millennium Station can board the CTA's #151 bus to Oak Street and North Avenue beaches. The CTA's #151 bus also stops within walking distance of Ogilvie Transportation Center and LASalle Street Station.

Rich Guidice, executive director of the Office of Emergency Management in Chicago, joined ABC7 to talk about safety at the Air and Water Show.

West Loop stations will also have water taxi service and all downtown stations are close to Divvy bike stations. Bicycle warning dates also will be in effect throughout the event, meaning that due to higher than normal ridership, it is likely that trains will not be able to accommodate bicycles on board.