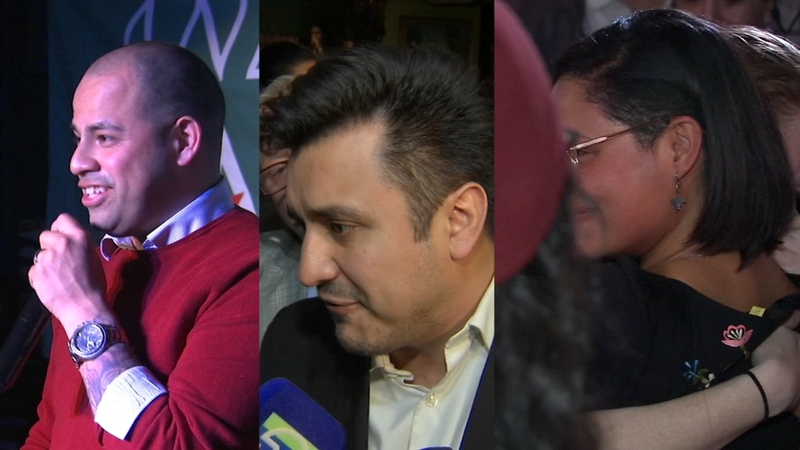 CHICAGO (WLS) -- The Chicago City Council will look different when new aldermen are sworn in next month.

Aldermen-elect Andre Vasquez and Byron Sigcho-Lopez and three other will form the Socialists Caucus in City Council, chaired by Ald. Carlos Ramirez-Rosa (35th Ward). If Rossana Rodriguez maintains her lead against incumbent Deb Mell in the 33rd Ward, she would also be part of the caucus.

"We are going to move the conversation to the left, we are going to fight for those things that we were elected upon," Ramirez-Rosa said.

Things like rent control and an elected school board, which actually take state action.

"You can continue to press ideas and policies, but you also have to work within the reality of what authority does city council has and what the state has," said Ald. Scott Waguespack (32nd Ward).

"Carlos likes to get out there and push an agenda, the question is, 'Are you working with people to get that done,'" he said

Ramirez-Rosa plans to work with Waguespack since the voting block of six socialists plan to be members of the Progressive Caucus as well.

However, tension could arise between the two caucuses since Ramirez-Rosa says the socialists will continue to push for reform the way that got them elected.

"Democratic Socialists know that change come from below, it requires the grass roots, it requires regular people lifting up their voices that is the approach we are going to take," Ramirez-Rosa said.

Some aldermanic races remained too close to call after Tuesday's election which saw 15 seats on Chicago's City Council up for grabs.

Here is a look at some of the results for Chicago's aldermanic races.

Alderman Deb Mell's political dynasty is in jeopardy on the city's Northwest Side. Her family has held office in the 33rd Ward since 1975.

Wednesday morning, she refuses to concede to her opponent Rossana Rodriguez-Sanchez. Mell finished the run-off election just 24 votes behind.

"Family dynasties aren't in anymore at City Hall," said ABC7 Political Analyst Laura Washington. "When you have this kind of mantra of change, people we those dynasties being associated with the machine."

5TH WARD
.
Meanwhile the battle in the 5th Ward is neck and neck. Incumbent Alderman Leslie Hairston holds a 206 vote lead over activist William Calloway who has been highly critical of the Emanuel administration. Calloway says the fight isn't over.

Calloway is a community activist who was outspoken about the murder of Laquan McDonald by former Chicago police Officer Jason Van Dyke.

Calloway said there were 1,300 vote-by-mail ballots that were requested and at least 60 percent have been returned.

The Board of Elections will have to have them counted by April 15, so it could be a while until we know a winner in that race.

Alderman James Cappleman's fate is still unclear. He has a narrow lead against political newcomer Marianne Lalonde for control over Uptown's 46th Ward. It's a 50/50 split between the two with Cappleman holding the lead by just 23 votes.

Both Cappleman and Lalonde say the outcome of their race hinges on mail-in ballots.

Foster-Bonner's 26-year-old son was attacked Tuesday afternoon outside of a polling site on the South Side, according to the Chicago Board of Elections.

"This overzealous supporter was immediately asked to leave. This incident does not represent the values of our campaign and we never tolerate violence in any form," said Sawyer campaign spokesperson Joanna Klonsky.

A campaign spokesperson was immediately unclear if the man was a paid worker or volunteer.

After embattled Ald. Danny Solis decided not to run for re-election, the 25th Ward has a new alderman for the first time in more than 20 years.

Both candidates support getting rid of aldermanic privilege and support two-term limits for aldermen and the mayor in an effort to avoid corruption.

O'Connor, a veteran alderman, is Mayor Rahm Emanuel's floor leader and the chairman of the powerful Finance Committee.

Vasquez won 54 percent of the vote to O'Connor's 46 percent.

Vasquez ran on a platform of government accessibility, transparency and accountability, something he said had been missing under O'Connor's rule.

Taking a look at the big picture, City Council now stands to have the most Hispanic aldermen and the fewest white alderman, signaling a wave of change.

"It's gonna be less white, more people of color than ever and it's going to be moving seriously to the left," Washington said.

Below is a list of other aldermanic races and the candidates: