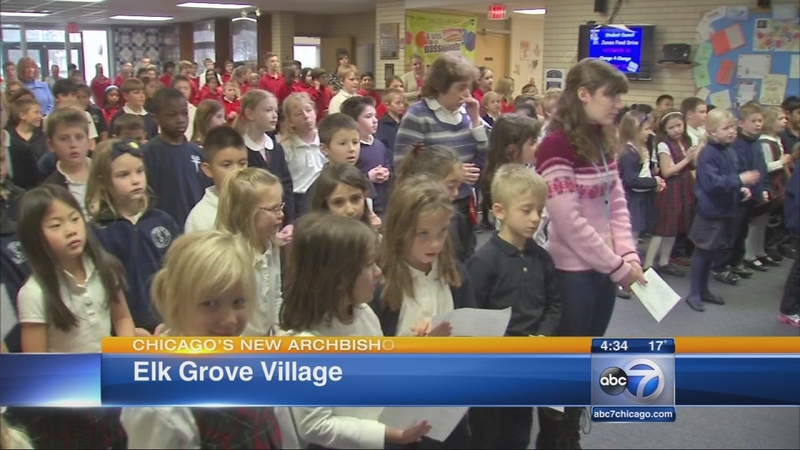 CHICAGO (WLS) -- With more than two million Catholics, Chicago is home to the third largest diocese in the United States. School children and members of the Croatian community watched as Chicago's new archbishop was installed.

"We're the kids of the future. So we kind of want to know what's going to happen in the future for us. He's going to impact our lives," Kayley Stoner said.

"We see that he wants to meet all of us," Evan Chaidez said.

Before his installation, Cupich said he was committed to Catholic education. Just recently, the Catholic Archdiocese announced several schools would close due to dwindling enrollment. Officials hope Cupich can generate new interest.

"It's more than just a building. It's really a family," Principal Kathy McGinn said of her school.

The Croatian community also considered Cupich family. More than 250,000 Catholics of Croatian descent call the Chicago area home and Archbishop Blase Cupich is one of them.

"With three, four churches in Chicago, so many organizations all around. We need something a little more to bring everyone together. I think this is another stepping stone to do that," Luka Ilic said.

The name Blase, pronounced "Blazh," is distinctly Croatian and a variation on the name Vlaho, the patron saint of Dubrovnik, which is a city on the Adriatic Coast of Croatia. Cupich is proud of his heritage and his coat of arms includes the checkered pattern of the crest on the Croatian flag.

"He has our background, first thing. And other thing, we have to be followers," Ada Soldo said.

Leaders in Chicago's Croatian churches hope the archbishop's connection to the community will give him a base upon which he can build a movement.

"It's not enough to speak Croatian, Catholic. But let's live it. Let's put it into practice. Let's be honest about it and if we love him let's live what he is telling us," Fr. Paul Maslach, Blessed Alojzije Stepinac, said.

Croatian Consul General Jelena Grcic Polic met Cupich in person for the first time on Monday. She expects the archbishop's message is one that will be easily received.