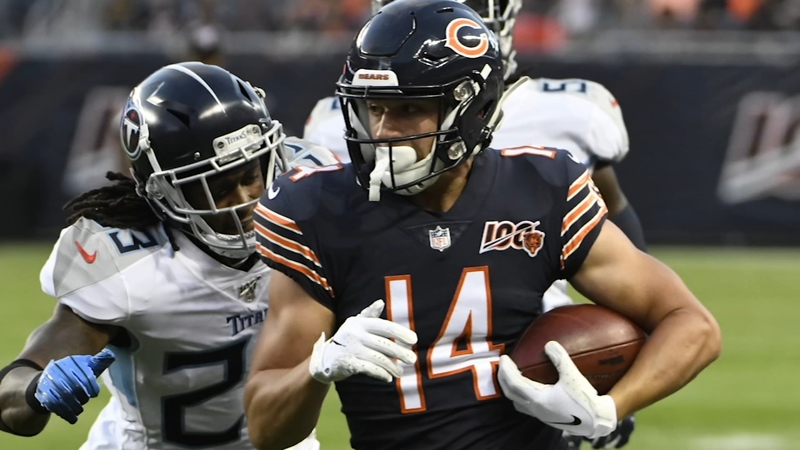 The squad is comprised of 10 players who the team can call up to games in case of injury or need.

The Hinsdale native talked to Miller about his roots and what it means to be part of the Chicago Bears as they ready for their 100th season.

What did it mean last Thursday night to take the field at Soldier Field and then be able to do some things in a game that showed them how valuable you can be?

"That's awesome. Especially being at Soldier Field, having grown up watching all the games and going to a couple here and there, throughout the years. It was really cool to be a part of it firsthand."

Was there a moment at Colgate where you felt like, "I can do this at the next level," and, you knew that you could get an opportunity, or at least earn one?

"Um yeah, there was one practice when, it was actually a Tennessee Titans scout that came to see a couple of us. And he said that, one of my coaches said, 'Oh, he's here to see you,' and then that was kind of the first time that it was, 'Oh, this might be a thing.' When I came home after that season, a family friend of mine went out to lunch and he said, 'You know, you got this handled to go out and do this thing professionally.' So those were kind of the first instances when I thought I could actually do this."

What has the support from Hinsdale been like, and just to be able to be close to family and friends?

"Oh, it's awesome. You know, you grow up wanting to be a Bear and your whole family is Bears fans. I've got family all over the Chicago area, so having their support has been awesome. They've been able to come to the games and you know, just getting text messages from family that's all over watching too. It's been awesome."
Report a correction or typo
Related topics:
sportshinsdalechicagochicago bearsnflfootball
Copyright © 2022 WLS-TV. All Rights Reserved.
TOP STORIES
1 critically injured in Dan Ryan Expressway shooting: ISP
2 charged in Near North Side McDonald's mass shooting, CPD says
Girl celebrates 1st birthday after shot in head in mass shooting
ABC7 presents 'Our Chicago: Asian Voices'
Sunday Mass at Holy Name Cathedral
Firefighters continue battling blaze at vacant west suburban resort
21 shot, 1 fatally in weekend violence, Chicago police say
Show More
Some peanut butter recalled for potential salmonella
Expect traffic, street closures for Chicago half marathon
Man robbed at gunpoint on Red Line train; suspect critically hurt
3 shot, 1 critically hurt on West Side, police say
'Absolutely terrified' teen boy dies hours after 'sextortion' scam
More TOP STORIES News