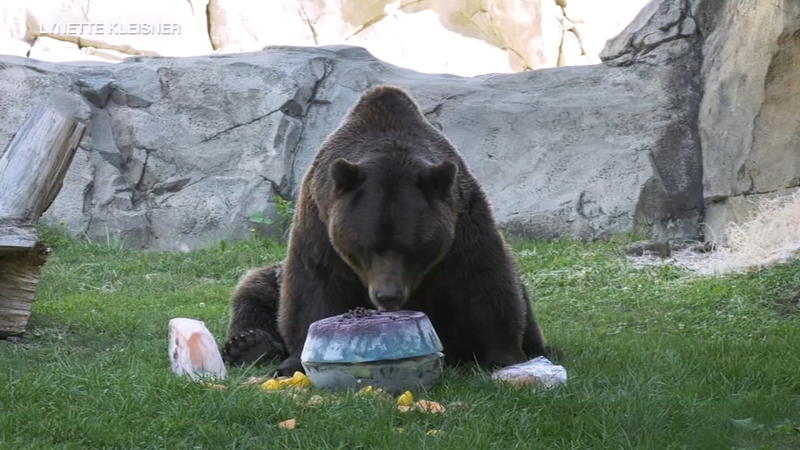 CHICAGO -- Matthew Stafford's second pass for the Los Angeles Rams traveled 53 majestic yards through the air and dropped right into the hands of Van Jefferson, who fell down untouched, stood up and scored.

The Rams have bet their future on Stafford being the key to turning a good team into a great one.


With a dynamic debut against Chicago, Stafford immediately showed the potential the Rams might have unlocked.

Stafford passed for 321 yards and three touchdowns in one of the most prolific quarterback debuts with a new team in NFL history, leading the Rams past Andy Dalton and the Bears for a 34-14 victory on Sunday night.

Stafford found Jefferson for a 67-yard touchdown on his second pass for the Rams, who swung a blockbuster offseason trade to acquire the 13-year veteran from Detroit. Stafford then hit a wide-open Cooper Kupp for a 56-yard TD to open the third quarter, and he found Robert Woods for a clinching score with 3:17 to play.

The first regular season crowd at SoFi Stadium roared throughout the night for Stafford, who immediately looked comfortable in his new home.

"I've done everything I can to work as hard as I can and get myself in this team, and they've wrapped their arms around me," Stafford said. "It felt good to go out there and play with them tonight. Such incredible players on this team. I'm lucky to be a part of it. I want to do everything I can to try and lead this team where it wants to go."

With Stafford in place of Jared Goff, the Rams again resembled the offensive powerhouse of their first two seasons under coach Sean McVay, who improved to 5-0 in season openers. The Rams scored on six of Stafford's first seven full drives while racking up 375 yards of offense.

According to the Elias Sports Bureau, Stafford became the first player with two touchdown passes of more than 50 yards in his debut for a new team since Lee Grosscup did it for the AFL's New York Titans in 1962. Stafford's 156.1 passer rating is the highest in NFL history for a quarterback who had at least 20 pass attempts in a debut with a new team, according to NFL Research.

"His command, his swag, everything was great," said All-Pro cornerback Jalen Ramsey, who had nine tackles. "That's like a debut that probably should go down in history, just the way he played, his swag. I'm not all into the stats all the time, but his stats was probably crazy, too. I mean, that was just a debut that was nice."

Dalton passed for 206 yards in his Bears debut, and rookie quarterback Justin Fields rushed for a 3-yard score while getting a handful of snaps in his NFL debut. Chicago moved the ball steadily all night, but David Long Jr. intercepted a tipped pass in the end zone on the Bears' opening drive, leaving them playing from behind all night.


"I was going to (Darnell) Mooney, and unfortunately it got tipped," Dalton said. "It stopped a real good drive for us. Set the tone with how we wanted to play, but didn't finish."

David Montgomery rushed for 108 yards and a touchdown for the Bears, who dropped to 1-3 in season openers under coach Matt Nagy.

"We gave up explosive plays and did not execute in the red zone," Nagy said. "Big-picture, we were able to move the ball. ... Once we got behind and got one-dimensional, that was more difficult."

But Stafford was the center of attention at SoFi, and he opened his Rams career with that long, beautiful throw to Jefferson on his third offensive snap. Los Angeles traded Goff and two first-round picks to acquire a 33-year-old quarterback with undeniable skills, but no career playoff victories.

As good as Stafford was, McVay sees bigger possibilities once the Rams really air it out.

"We only threw it 26 times, but he certainly made the most of those plays, and I thought he did a great job," McVay said.

Montgomery finally scored Chicago's first points 34 seconds before halftime, but Kupp - who finished with seven catches for 108 yards - put the Rams up 20-7 early in the third when Chicago's secondary left him completely unguarded 10 yards behind its safeties.

Chicago kept it close with a 16-play, 81-yard drive capped by Fields' TD run, but Darrell Henderson punched in another TD for the Rams late in the third.

Dalton has begun his Bears career in a competition with Fields, the touted Ohio State rookie who looked impressive in the preseason. Nagy used both quarterbacks against the Rams, intermittently substituting Fields from the opening drive onward. Fields completed both of his passes for 10 yards.

Bears: LT Jason Peters injured his quadriceps early in the third quarter of his Chicago debut. Rookie backup Larry Borom also came out later in the same drive with an ankle injury. ... Starting NT Eddie Goldman was inactive with knee and ankle injuries. Nickel back Duke Shelley also sat out.

Rams: Road opener against the Indianapolis Colts on Sunday.