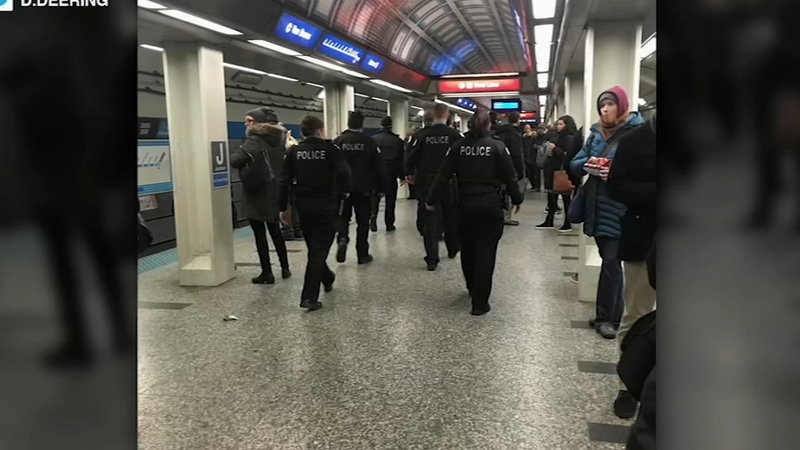 The shooting happened just after 5 p.m. Thursday in the tunnel that joins the CTA Red and Blue Lines at Jackson Boulevard, police said. The victim, a 27-year-old man, was standing in the tunnel when someone came up and fired two shots at him, according to Chicago police.

The victim was conscious after being struck once in the left hip, police said, but was not cooperating with the investigation. He was taken to Northwestern Memorial Hospital in serious to critical condition, officials said.

The shooter, who was wearing a surgical mask, fled westbound through the tunnel, police said, either going up to street level or getting on a train. That tunnel is blanketed with high-definition cameras, according to CPD spokesperson Anthony Guglielmi, allowing detectives to review video of what happened.

Police do not know what led up to the shooting, though CPD chief of patrol Fred Waller said at a news conference that police believe the shooter and victim may have known one another, as the shooter was standing very close to the victim as shots were fired.

"I didn't know where the shots were coming from or anything," said Meniki Warren, who was near the scene of the shooting. "People were just getting off the train, running and running out from out of the tunnel, just running toward the other end of the train."

Chopper 7HD was over the scene and captured video of a heavy police presence along State Street.

Blue Line trains were standing at Jackson as police searched for a suspect, authorities said. Blue Line service was suspended between Grand and UIC-Halsted about 5:30 p.m., according to a tweet from the CTA.

As a result of the suspension between Grand and UIC-Halsted, Blue Line trains were operating in two sections: between O'Hare and Grand and between Forest Park and UIC-Halsted, only, according to the CTA. The agency encouraged commuters to consider using buses or taking the bus to an alternate train line.

Red Line trains were not stopping at Jackson as authorities investigated, according to a CTA tweet.

Normal service and stops along the Blue and Red lines resumed about 5:50 p.m., according to a CTA tweet.

Despite the incident, Waller assured commuters that it was safe to take public transportation.

"This area is probably one of the safest areas in the city," he said, citing the number of officers deployed to the area. "This is a targeted incident so the riders should not feel any type of discomfort or any type of hesitation on riding the CTA."