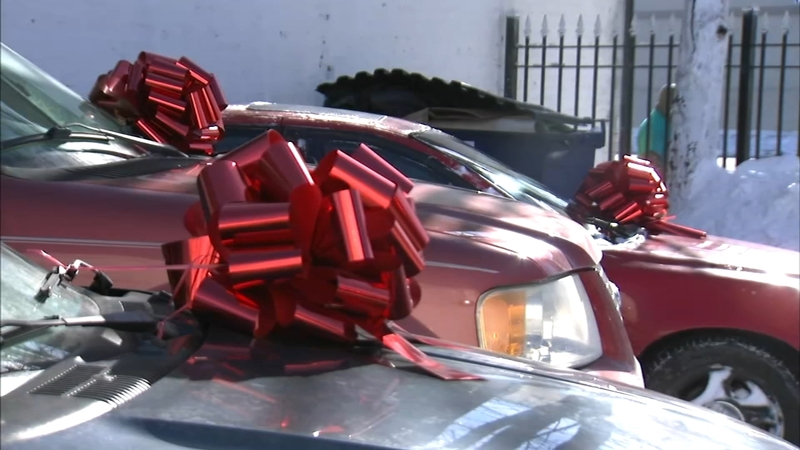 CHICAGO (WLS) -- A good Samaritan surprised people who have been victims of carjackings with new vehicles Thursday - and it was something none of them saw coming!

They were lured to a neighborhood car dealership and car wash on Chicago's West Side by the promise of some much need help. Upon arrival, Good Samaritan Jermaine Jordan gave the victims of recent carjacking the surprise of a lifetime.

Best known for his Free Hot Meals restaurant on Madison Street, Jordan owns the car lot, too. He used his own money along with donations to cover the cost and fees of giving the cars away.

"I felt like I had to do something because I was a victim of being carjacked three times, and each time I thought that my life was over with," Jordan said.

Working single parent Taqueria Little fought to hold back tears as she was gifted an SUV. Little was carjacked at gunpoint on December 6 on her way home from work as she waited to pick up her kids.

"Two guys approached me and take me out of my car with no shoes on or anything," Little said. "I had just cashed my paycheck. Everything was in there. I lost everything."
Track

Emotions ranged from elation to shock. Luxury rideshare driver Abdullah Saleem had his black Lexus taken by an armed thief posing as a passenger.

"It was very traumatizing," Saleem said. "For one whole month, I was paranoid. I was disturbed. It's not an easy thing to go through."

"I'm not working right now," she said. "My funds are being depleted off of just living and trying to make other ends meet."

Everyone also received a gas card and free groceries - along with a renewed sense in the power of doing good.