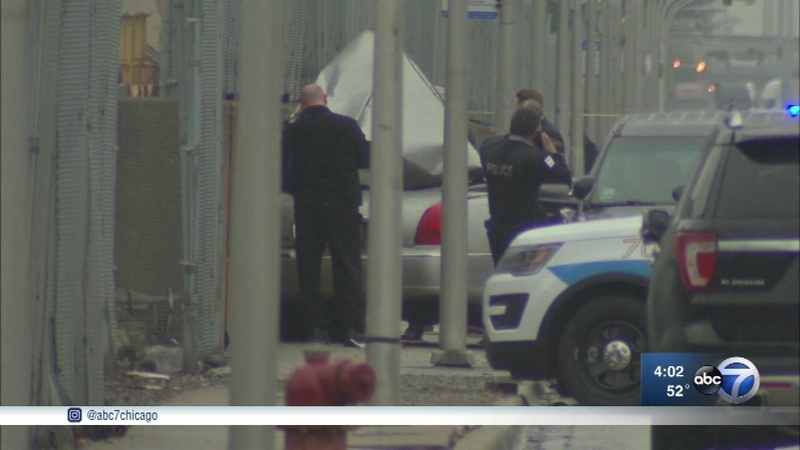 CHICAGO (WLS) -- One suspected car thief died and another was critically injured in a crash Wednesday after leading officers on a chase in a stolen vehicle on Chicago's South Side, police said.

Two masked men forced a driver out of a car at gunpoint just before 9:50 a.m. in the 1000-block of West 61st Street in the city's Englewood neighborhood, police said.

The suspects sped off in the stolen vehicle, with police in pursuit. The chase ended in a crash around 10 minutes later after the driver lost control and crashed into a utility pole near South Wentworth Avenue and West 47th Street, near the Dan Ryan Expressway, in the city's Fuller Park neighborhood.

One of the men died at the scene, police said. The other was rushed to Stroger Hospital, where he was listed in critical condition. That suspect is in custody, police said.

"I was wondering what, did somebody steal from the household? That's what I was thinking. It never crossed my mind that some vagabond would be jacking his car," said Alexander Stewart, victim's neighbor.

Police have not yet confirmed whether the latest carjacking is connected to the string of incidents that have occurred in the last week.

CAR STOLEN IN STRING OF CARJACKINGS FOUND ON NORTHWEST SIDE

A white Dodge Charger found parked on Chicago?s Northwest Side early Wednesday morning is linked to a crime spree, according to police.

There have been more than a dozen armed carjackings in Chicago since Sunday. The Charger was found near North Damen Avenue and West Augusta Boulevard in the city's Ukrainian Village neighborhood, a short distance from where it was stolen Monday morning.

Police said the vehicle was used in at least four armed robberies in west suburban Cicero. The Charger may be one of several vehicles carjacked by Davontae Jones, 18, and Jason Dortch, 19.

They were both arrested Monday night after allegedly stealing a white Jeep Cherokee from a man parking it in the 800-block of North Racine Avenue in the city's West Town neighborhood and leading police on a chase. After losing control of the carjacked Jeep on the Eisenhower Expressway near Austin Boulevard in west suburban Oak Park, the suspects abandoned the vehicle and tried to get away on foot.

Officers caught them not far from the scene. A gun with an extended clip and stolen property were recovered at the scene, police spokesman Anthony Guglielmi said.

Jones and Dortch were each charged with aggravated vehicular hijacking with a firearm, a felony. They are both due in Bond Court Wednesday. However, investigators said they're still searching for one more suspect, who may have been working in conjunction with the pair.

"I was coming down Augusta at the stop sign at Wolcott. This car right here, they used to block me off. All three of them jump out with guns, two on the driver's side on the passenger. Told me to get out of the car. Then, when I looked at guns... You can have this damn car," said Steve Thomas, the owner of the Charger.

More than 700 carjackings have taken place in Chicago so far this year.

Police said the problem isn't arresting those responsible - it's keeping them locked up. Unlike these two men, a large number of carjackings are the work of juveniles who are quickly released back onto the streets.

"If you come out there and you think you're going to continue to carjack, you're wrong. We're going to come after you with everything we have, everything at our disposal, and we will get you because this simply will not be tolerated in the city of Chicago," Chicago Police Superintendent Eddie Johnson said.

His comments were partially aimed at a number of juveniles from the West Side who've played a part in the rising number of carjackings in the city, which so far this year total 760.

Guglielmi said 180 arrests have been made in those cases. Last year, 177 arrests were made in 663 carjackings, he said. But he could not say how many of those arrests resulted in charges.

"We do know there's been an increase in juvenile offenders committing this crime," Johnson said, noting that detectives have determined the teens are largely from West Side neighborhoods.

In response, Johnson is sending police staff to schools in these areas "to find out what's the driving force behind it."

"Juvenile justice is a complex issue," Johnson said. "We recognize that their minds are not fully developed, but at the same time there has to be a consequence for those actions. We cannot wait for individuals to age out of committing those types of crimes."

Johnson spoke to reporters after a police graduation ceremony Tuesday at Navy Pier in which 199 new cops were sworn in.

Detectives are trying to determine if the men charged Tuesday are also linked to the following carjackings and robberies that occurred: