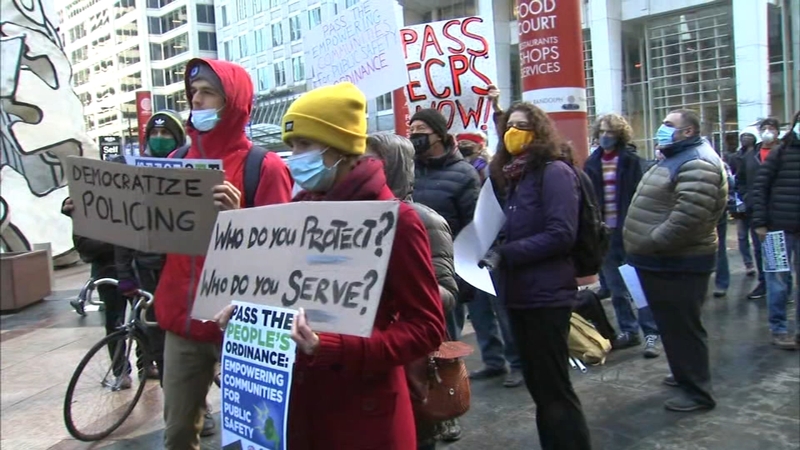 CHICAGO (WLS) -- One day after the guilty verdicts in the Derek Chauvin trial, renewed calls for police reform came with a new urgency.

A crowd of demonstrators descended on City Hall as the Chicago City Council held its first in-person meeting in a year.

"They cannot just play political games with Black and Brown people. We are demanding systemic change in this city," said Kobi Guillory, Chicago Alliance Against Racist and Political Repression.

Actor and activist Danny Glover flew into Chicago and joined the group to rally behind their cause.

"Chicago is a great city. It stands right in the shadow in some important moments right here in this country's history," Glover.

Police reform was not on the agenda for Wednesday's city council meeting, but it was top of mind for many aldermen. Demonstrators who gathered outside made it clear they will keep up the pressure for as long as it takes.

More than 100 people gathered across the street from City Hall for a rally to call on Mayor Lori Lightfoot and city council to enact the Empowering Communities for Public Safety ordinance, a hybrid of several plans for civilian police oversight of police.

Around 100 people rallied in the Loop calling for police reforms one day after a former police officer was convicted in the death of George Floyd.

"Lori Lightfoot promised that she was going to release a police accountability bill within 100 days of her getting into office," Guillory said. "It's been two years. And we've seen nothing."

"In the city of Laquan McDonald, in the city of Adam Toledo, we've got to pass the strongest version of civilian oversight in the country," 35th Ward Ald. Carlos Ramirez-Rosa said.

The rally coincided with the first in-person city council meeting in a year. The mayor was joined by 28 aldermen who participated in person, while the other 22 stayed virtual. Police reform was on the minds of many, including the mayor, who said she is moving forward with her own plans. Aldermen said there needs to be some urgency.

"We need to restore the legitimacy of law enforcement in the eyes of our residents, and the only way we can do that is to ensure that if things go wrong we have an accountability measure that everyone believes so that no one doubts the facts of the case and that is civilian oversight," 15th Ward Ald. Ray Lopez said.

"I want to make sure that whatever is voted on has been thoroughly vetted by every conceivable stakeholder that we thought long and hard about the long term implications - and not 'let's just get something passed, and then we'll clean it up later,'" Lightfoot said.

On the heels of the police shooting of Adam Toledo, the mayor said she will introduce her plans for a foot pursuit policy soon.

"I think we've seen with recent events in the last several months, there is a strong need for police reform. And I think the conversations have been going a bit too slow at City Hall," said Ald. Brendon Reilly, 42nd Ward.

But with Superintendent David Brown staying behind the scenes on the Toledo case and others, he too is facing criticism about his leadership.

"I can tell you right now that he's probably been the least visible, the least effective superintendent that I've seen in my 22 years," said Ald. Anthony Beale, 9th Ward