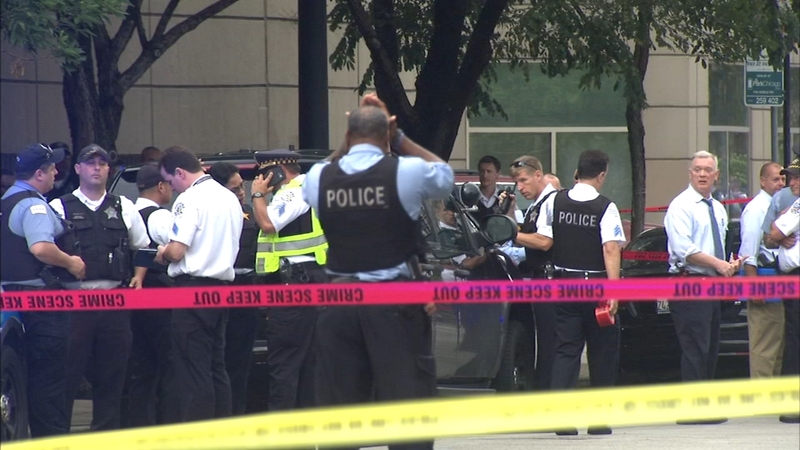 CHICAGO (WLS) -- Who serves and protects those who serve and protect?

That question is being raised again after the third Chicago police officer in three months died Wednesday by suicide.

The latest officer, a 54 year old veteran of CPD, was found unresponsive in the Calumet District parking lot at 727 E 111th St. about 8 a.m. She was inside her personal car and is thought to have died from a self-inflicted gunshot wound before her shift began.

Oddly, it was the second officer-suicide in that very same parking lot in recent months.

The rash of police suicides underscores an intense problem within the ranks of CPD, where a recent report by the Department of Justice revealed that the officer-suicide rate in Chicago may be 60% higher than elsewhere in the U.S.

"Crushing news for the department this morning as we grapple with the suicide of a veteran Chicago police officer who took her life inside her personal vehicle,'' stated chief police spokesman Anthony Guglielmi in a Twitter post. "Please pray for this officer's family and fellow officers."

"I think that there is something going on," said Kevin Graham, president of the Fraternal Order of Police union local that represents thousands of Chicago officers. "A job that is tremendously stressful has become more stressful. It has to do with one of peers being on trial, it has to do with the consent decree, it has to do with no contract, it has to do with being blamed for things they have no control over" said Graham in an interview with the ABC7 I-Team.

In July, a CPD officer shot and killed himself while on duty and inside his squad car parked at the Calumet headquarters.

On Labor Day afternoon, a mass transit unit supervisor was found dead of suicide in his squad car in the West Loop near Des Plaines and Madison.

Is there a thread that runs through the three suicides in three months?

"I think those are things that the family has to answer and I don't think it's appropriate for me to answer those things" said the FOP's Graham. "But certainly they were under some stress and we don't want any more officers to feel that they can't turn for help."

In a proposed federal consent decree, the DOJ was to require development of a CPD program for officers to address suicide prevention by January 2020. This would part
of an effort to expand counseling services.

"They have hired two more since then. That's not enough. They need to hire more," Graham told the I-Team. "They need to expand their program and that's certainly one of the things we're talking about even in contract negotiations to make sure that the peer support people are there to help our officers to make sure that if they need help that they can have it and that they're not going to face any repercussions from the department."

"The chaplains unit headed by father Dan Brandt took on a very big role as they offer services to officers," said Guglielmi. "In addition to office hours, Father Brandt goes on patrol once a week typically during nights and overnights to ride up on jobs and just check on officers across the city" he said.

Guglielmi said that officers will often contact one of the chaplain's when they are having issues. CPD also have the employee assistance program (EAP) with Dr. Robert Sobo, who is a licensed clinician. "We've added counselors to his team and we will be adding additional license clinicians as well" Guglielmi said. "Whenever officers or supervisors sense trouble with a colleague, they can reach out to EAP to get in touch with the officer and supervisors can mandate a visit."

CPD officials also point to a peer support network they have established that is made up of police officers who have gone through similar struggles with depression or challenges with the job. "This is a peer-to-peer program that officers can call confidentially to talk to one of your colleagues that may have been through the same struggle" he said.

Across the U.S., suicides leave more officers and firefighters dead than all line-of-duty deaths combined.

A new "first responder" study by the Ruderman Family Foundation, a philanthropic organization that works for the rights of people with disabilities, looked at depression, post-traumatic stress disorder and other issues affecting first responders and the rates of suicide in departments nationwide.

According to the research, in 2017 there were 103 firefighters and 140 police officers known to have committed suicide-more than those who died while in the line of duty.

The national average number of suicides in the general population is 13 per 100,000 people.

In Chicago, according to data cited in the DOJ report, the number of police suicides is between 22 and 29 per 100,000.

"I want to make sure officers know that they can go to employee assistance without fear of losing their job or embarrassment," said Graham. He says if officers don't want to go to police department counselor's then they should call the FOP and the union will get them help, Graham said.