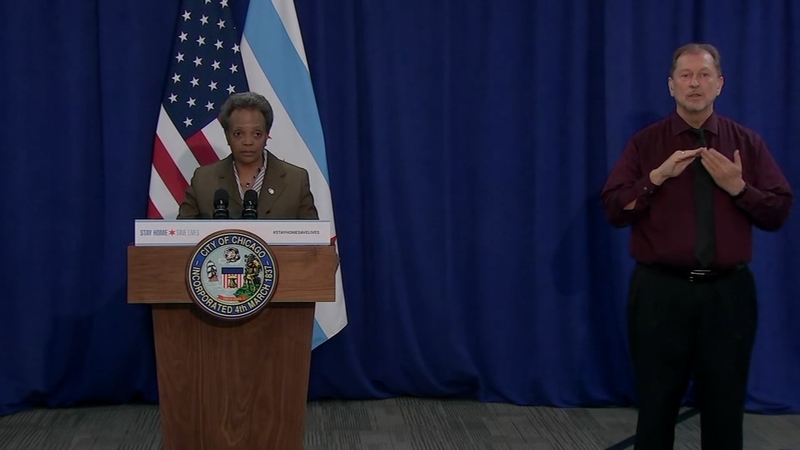 She made the announcement at a press conference about the pandemic.

"It's with a heavy heart that I'm here to announce that Chicago has lost one of our own city employees to COVID-19," she said.

Although city departments, like the police department, have been impacted by the coronavirus, the mayor would not reveal where the employee worked. But it was a stark reminder for everyone.

"The numbers we report every day are not statistics," Lightfoot said. "They are people whose lives have been forever changed."

Along with the death, the mayor and Chicago Department of Public Health director Dr. Allison Arwady also addressed the debate about whether or not we should all be wearing face masks.

"I think stay tuned, certainly some of the data the last few days has been interesting and making people think if there are additional tactics we need to be doing," Arwady said.

"I don't want them to think the masks make them invincible, because it doesn't," said Lightfoot.

The debate about masks unfolds as more and more people get cabin fever.

As spring emerges and nice weather returns, many are concerned that social distancing guidelines will be ignored and the coronavirus will spread more, not less.

With the spring sun finally shining and cabin fever starting to rage, some of the city's sidewalks appeared to have little room for social distancing.

In Lincoln Park, plenty of people were out for fresh air in the late afternoon. And while that's not forbidden, it isn't what is being asked for by the city, state and federal governments.

"You just need to get out, you know, but you have to respect what's going on," Almanza said. "You can't be blind to that."

"Social distancing is staying at home," said Dana Berns, Chicago resident. "Going out if you have to go to the grocery store, walk your dog, things like that."

The mayor was unequivocal in her position.

"For now, at least through April 30, people have to keep doing what they have been doing, to stay at home to save lives," she said.

In the last six days, Chicago police said they've issued 869 dispersals breaking up crowds, seven citations, and made just one arrest for violating the orders.

"I was out Sunday and actually the police were out here telling people to go away," Almanza said.

With temperatures rising into the 60s the next few days, police say they'll be out enforcing a safe social distance.

Looking past spring into Summer, the mayor was asked if Lollapalooza should be canceled. The massive music festival is four months away.