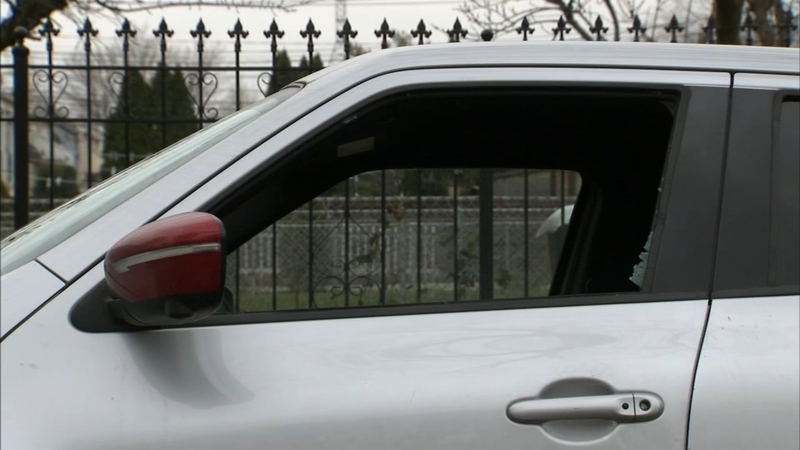 The first robbery occurred at about 2:55 a.m. in the 3800-block of West 32nd Street as a 38-year-old victim was parking a vehicle. The victim, who asked not to be identified, talked to ABC7.

"He said, 'Give me everything or we kill you here,'" the victim said.

He said two suspects, one armed with a gun and the other with a baseball bat, pulled up next to him in a dark-colored SUV. Then, a man got out and tapped on his window.

"He said, 'Open your door,' and I said, 'Why?' He said, 'Just open the door,'" the victim said. At that point, the man broke his window. The suspect then tried to open his door, which was locked.

He said the man attempted to pull him through his broken driver side window, but he managed to escape through his car's passenger side door. He took off running only to be pursued by a second attacker armed with a baseball bat.

"I run and he follow me and he take me and hit me with a bat," the victim said.

He was able to break free and get to safety. The beating left him with bruises to his back and left arm.

The robbers drove off and may have targeted two people that same evening.

The second incident occurred about 15 minutes later in the 2500-block of South Christiana Avenue. Police said a 62-year-old man was getting out of his vehicle when two suspects approached him and forced the victim into his residence at gunpoint.

The robbers then took an unknown amount of money before fleeing the scene in a dark-colored SUV, police said.

About twenty minutes later on the same block, a 31-year-old woman was in her parked car when a dark-colored SUV approached her. One suspect wearing a mask began hitting her car with a baseball bat and demanding she open her car door.

The victim drove off and the suspects fled in an unknown direction. She was not injured, police said.