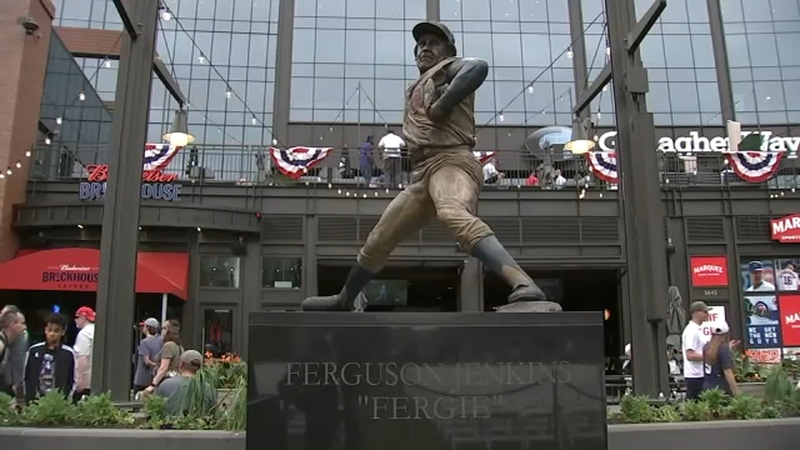 CHICAGO (WLS) -- The Cubs honored legendary pitcher Ferguson "Fergie" Jenkins as the team unveiled a new statue on Statue Row of the Hall of Famer.

It was quite a celebration Friday.

Jenkins has been waiting years for this moment.

"It's nice to know my grandkids will see grandpa Fergie here at Wrigley," Jenkins said.

In fact, the pitcher, who won 20 or more games six years in a row and won the Cy Young Award in 1971, shared the honorary first pitch duties with his grandson. Together, they delivered the ball to Clark the Cub.

"He was a great player and a great teammate," Said Hundley, a retired Cubs catcher. "Happy for him to have this award."
Jenkins is one of only two Canadian-born layers in the Hall of Fame, and the Town Crier from his hometown in Canada read the proclamation.

Sculptor Lou Cella said Jenkins came to his studio to help get every detail of the statue right. He said there was no doubt about the pose they would use, which is modeled on the cover of Sports Illustrated when he won the Cy Young in 1971.


"That was automatic. He had such a powerful magnificent delivery," Cella said.

Jenkins is already in the Hall of Fame. He's had his Cubs jersey retired but said this statue is the greatest honor of all.

"It was the icing on the cake to have my uniform retired. Now, this is the cake," Jenkins said.