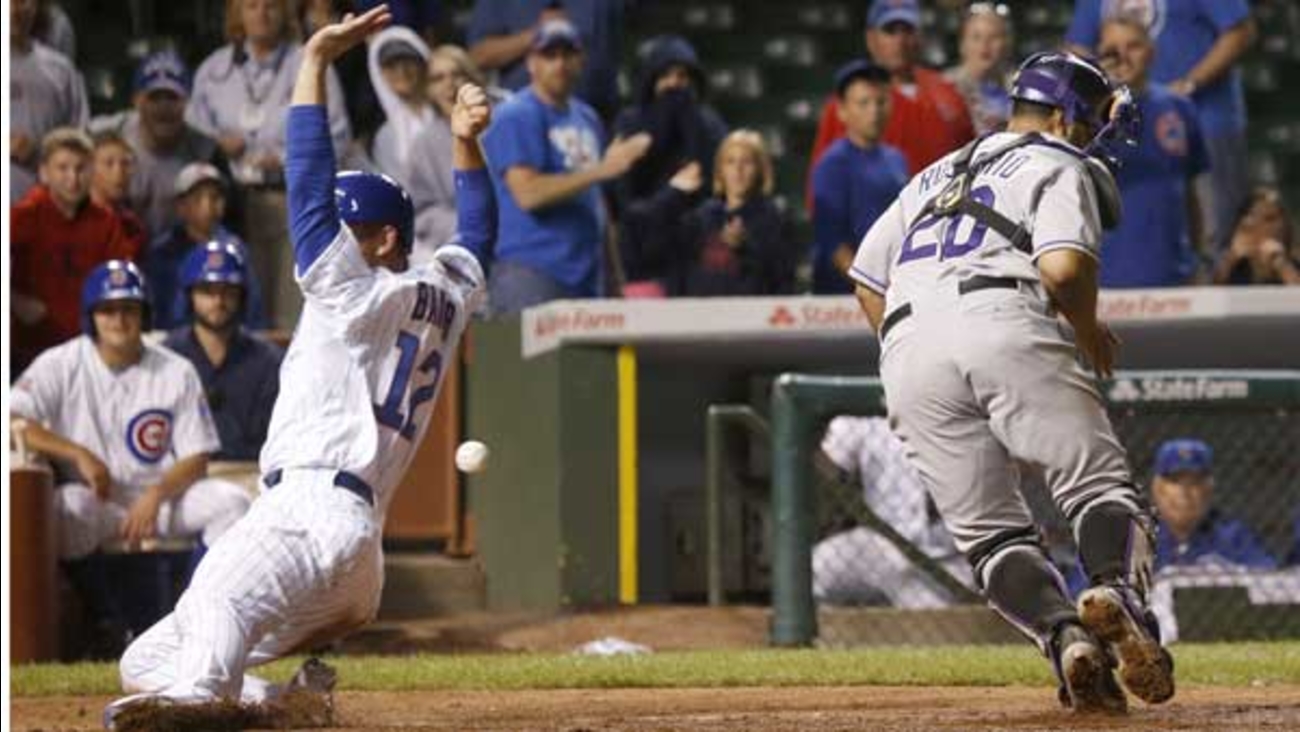 CHICAGO (WLS) -- Chicago Cubs catcher John Baker scored the winning run against the Colorado Rockies in the longest game by time in the history of both teams.

The game lasted a record-setting six hours and 27 minutes, with Baker scoring on a sacrifice fly by shortstop Starlin Castro in the bottom of the 16th inning to give Chicago a 4-3 victory at 1:30 a.m. Wednesday.

The Wrigley Field scoreboard reflects the time in which a Tuesday baseball game between the Chicago Cubs and the Colorado Rockies finished on Wednesday, July 30, 2014, in Chicago.

The Wrigley Field scoreboard reflects the time in which a Tuesday baseball game between the Chicago Cubs and the Colorado Rockies finished on Wednesday, July 30, 2014, in Chicago. (AP Photo/Charles Rex Arbogast)

Die-hard fans stayed at Wrigley Field for the entire game and went home happy with a victory.

"I don't know when we'll be back to Chicago," Greg Jenson said. "So we just figured, tough it out until the end. It was a great ending."

"Great game. Glad to be part of it," Phil Ferenzi said. "They let a lot of the fans sit in the seats behind home plate when it got to about the 14th inning."

This game breaks the old record set in 1982, when the Cubs-Dodgers game had to be postponed overnight. Wrigley Field didn't have lights installed at that time. The game lasted six hours and 10 minutes.

The Chicago White Sox hold the overall Major League Baseball record for the longest game. The Sox took on the Milwaukee Brewers for eight hours in 1984, playing 25 innings.

Both teams ran out of relief pitchers in Tuesday's marathon game and resorted to using position players.

"It's really cool to get a chance to do this," Baker said. "I was having trouble not smiling on the mound. You never get opportunities to do things like this."

The 33-year-old Baker joked that might not have pitched since he was college-aged.

The Rockies also used all seven relievers in their bullpen, then turned to Tyler Matzek, a starter in the 16th.

Matzek (2-5) walked Baker to lead off the inning. Baker advanced to second on a sacrifice, then third on Anthony Rizzo's bloop single before scoring.

"I've thrown in the pen before and had a routine down," Matzek said. "So it wasn't anything crazy. I just didn't execute."

Chicago's Emilio Bonifacio had game-tying two-run homer in the fourth inning and a double among four hits. He is 14 for 35 since returning from the disabled list (strained right oblique) on July 22.

Rockies first baseman Justin Morneau returned from the disabled list and drove in two runs with a double. Corey Dickerson added two hits and an RBI

Morneau, who had been out since July 13 with a strained neck, entered hitting .312, third best in the National League. He leads Colorado with 62 RBIs.

Jackson allowed all three Colorado runs in the first, then Chicago's bullpen - plus Baker - held the Rockies scoreless for 15 innings.

"When you go 15 innings without scoring a run, you don't deserve to win," Colorado manager Walt Weiss said.

Both teams had chances to win in the 10th.

Colorado's D.J. LeMahieu missed on a suicide squeeze with Morneau on third and Charlie Culberson on second. Morneau was tagged out by catcher Welington Castillo.

In the bottom of the inning, Castillo lined a drive deep to center field with one out and Castro on second. But the Rockies' Charlie Blackmon raced back and made a spectacular diving catch.