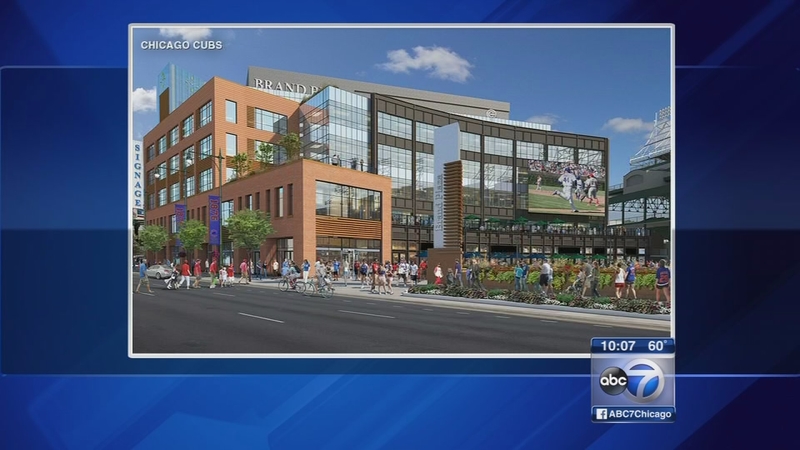 CHICAGO (WLS) -- The Chicago Cubs and their neighbors met Tuesday night to discuss controversial plan to serve alcohol at the new plaza being built alongside Wrigley Field.

Residents of the Wrigleyville community of the Lake View neighborhood packed the Lakeview Presbyterian Church, skeptical of the plan they call the world's largest beer garden. Some fear the plan could create a Lollapalooza-type environment.

The Cubs say the plaza, which is still under construction, will be a family-friendly gathering spot. The vision is a gleaming public square open to thousands of people with shopping, ice skating, concerts and other events. The team said it will be a world-class destination: clean, secure, and well-staffed.

There would also be alcohol year-round on the plaza, which would be served as late as midnight on weekends. That has some worried.

"You guys can't even control the noise from your Jumbotron, and that's in your own confines," said Lisa Iverson, of the Southport Neighborhood Association, at the meeting. "We have families that live here, people who have kids who have to go to school, people who get up early who have to go to work."

"All of this money is being spent for people to make lots of money, and we're still here with a parking problem," said resident Jeff Glenn.

However, Heather Way Kitzes, the Cubs' community affairs manager, said the plaza would be cleaned daily, after all games and events, and there would also be 24-hour security and cameras.

"Our vision is not a 24-hour-a-day, seven-day-a-week, 365-day-a-year beer garden," Way Kitzes said. "We are creating a space that is safe and inviting, and safety is a priority."

Tunney said the Cubs have rejected his plan for the complex, which would limit access to the plaza to only ticket-holders of games and events, require beer and wine sales to end during the seventh-inning and would not allow alcohol to be sold in the plaza on non-game or event days.

"It's fair, and it's incremental, and it gives them an opportunity to open the plaza and to see how it works for the community," said Tunney.

But the Cubs have accused Tunney of an unfair playing field, restricting the right of the Cubs to run their business in order to protect the interests of Wrigleyville bar owners.

Tunney said the Cubs are ignoring the realities of the neighborhood.