After credit downgrade, is Chicago the next Detroit? 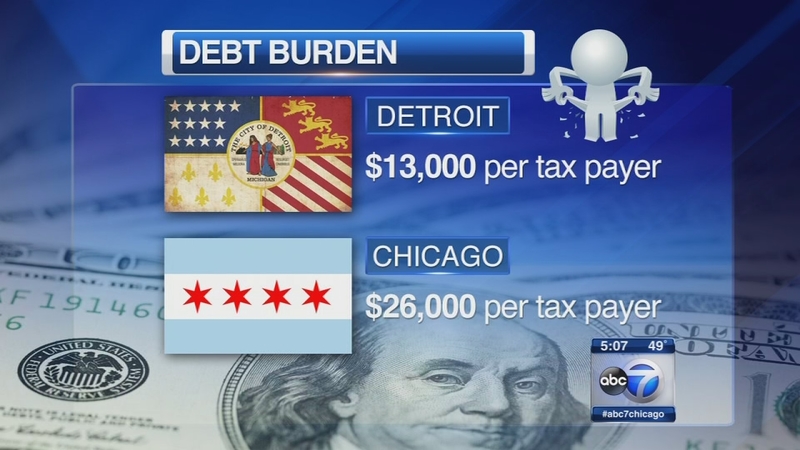 After credit downgrade, is Chicago the next Detroit?

CHICAGO (WLS) -- A Moody's executive spoke out for the first time since downgrading Chicago's credit rating to "junk," but experts say the financial outlook here is not as bad as it was in Detroit.

A Moody's representative surfaced at Tuesday's City Club meeting to explain why, in Moody's opinion, Chicago has the worst credit of any major U.S. city.

Ten days ago, Rachel Cortez, the Chicago-based Moody's executive, announced to the world that her hometown's bonds are rated "junk," even lower than the State of Illinois. And she says it's mostly because of tens of billions the city, public schools and park district owe for pensions.

"Chicago is in a much more precarious place than Illinois is with respect to its pensions," Cortez said.

Chicago joins Detroit in the ranks of cities whose bonds are considered "junk". The Motor City declared bankruptcy after decades of decline as its dominant auto industry departed.

Moody's estimates that before bankruptcy, each Detroit taxpayer owed $13,000 in pension debt. Right now, Moody's says, each Chicagoan owes twice as much: $26,000.

"Chicago is the third largest city in America. Detroit is Iraq. Detroit is a disaster zone. They have no economy," said Matt Fabian, Muncipal Markets Analytics.

"The city of Chicago is the most diversified economy in the country. No one sector drives more than 13 percent of employment," said Mayor Rahm Emanuel.

Mayor Emanuel, who spoke at a tech company meeting Tuesday morning, agrees there is no comparing Chicago to Detroit. But only, experts say, because Chicago still has plenty of people, houses and businesses to tax.

Cortez also said new revenue would help the city improve its credit rating, but adds that how a government solves its problems is none of hers or Moody's business.

"We're not advising the state or the city or the school districts what they should or shouldn't do. We're just commenting on the options that are available," Cortez said.

Cortez also expressed her company's doubt that the pension agreements the city reached with half its unions last year will pass court muster following what the supreme has already said about state pension.

Mayor Emanuel says the city will consider a property tax increase to meet its pension obligations only as a last resort.