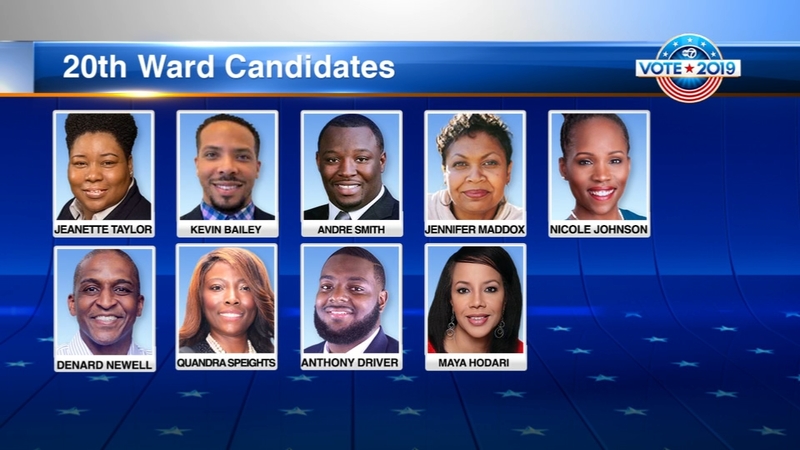 CHICAGO (WLS) -- Nine candidates are vying to replace Ald. Willie Cochran in Chicago's 20th Ward on the South Side.

The election is Feb. 26 and the contenders are promising big changes and fresh start.

While there are pockets of development, the ward is mainly defined by poverty, crime and corruption. The retiring Cochran is the third alderman to face federal criminal charges - two of his predecessors went to prison.

Some of the candidates spokes to ABC7.

Jennifer Maddox, a Chicago police officer, said she isn't worried about the ward's corrupt past.

"I can look at who I am as a person, my track record and I don't look at what other people have done that is them," Maddox said.

Maya Hodari has been endorsed by the Chicago Tribune and Chicago Sun-Times. As a Chicago Housing Authority employee, her focus is bringing residents back to the ward using affordable housing.

"I'm running for alderman because I grew up on the South Side at a time when our neighborhoods looked a lot different than this," Hodari said.

Kevin Bailey is also a native of the ward and the 20th Ward Democratic committeeman. If elected, Bailey said transparency is the key to avoiding the mistakes Cochran and others made.

"If the there is a development, there needs to be a development committee, an impact analysis and criteria on why you made the choice," Bailey said.

Nicole Johnson, 29, is one of the youngest in the race. She has 12 billboards across the ward and financial support from Chance the Rapper.

"It shows I made a very conscientious descsion to root my career in public service," Johnson said.

Jeanette Taylor, a community activist, has union support and has raised the most money. Her priority is to make sure businesses and decisions made reflect the community.