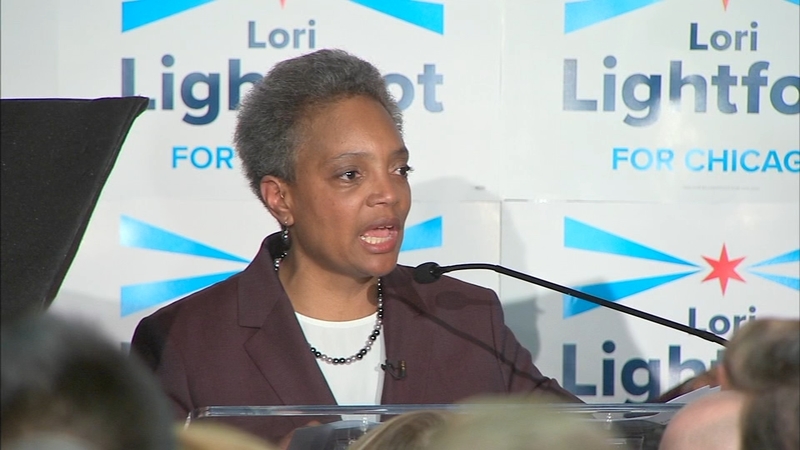 CHICAGO (WLS) -- History could be made as Chicago is poised to elect its first black female mayor in the runoff election on April 2.

Nearly four hours after the polls closed and with about 95 percent of precincts reporting, it appears Lori Lightfoot and Toni Preckwinkle will face off for the city's top office. As of 10:40 p.m., Lightfoot led Preckwinkle by about 7,900 votes.

Lightfoot took to the podium about 9:15 p.m., speaking to supporters about breaking Chicago's so-called political machine.

"As some of you know I've been saying now for the last few weeks that this election's gonna be about whether we resign to the status quo or we resolve to fight for what's right," she said. "This election is about the crumbling machine of the past once and for all and demanding an independent, accountable city hall that serves the people, not the political machine."

"I'm not afraid of big challenges or hard work. I know what it takes to tackle them," Preckwinkle told supporters.

Preckwinkle addressed her supporters about an hour later.

"I'm not afraid of big challenges or hard work. I know what it takes to tackle them. And I know how gratifying it is when our efforts bend the arc of history a little closer to justice day by day," she said. "While my opponent was taking multiple appointments in the Daley and Emanuel administrations, I fought the power elites who have been trying to hold this city back for decades."

Willie Wilson addressed his supporters Tuesday night, but did not concede in the mayor's race.

Willie Wilson also made clear that he is remaining in the race, though he trails Preckwinkle, who is in second place, by more than 28,000 votes with 96 percent of precincts reporting.

"There's no reason to be discouraged yet, because we have a lot more (votes) coming in," he said. "So we're not going to call it yet, because there's so much that's out there."

There were originally 14 candidates vying for the city's top office Tuesday, the most ever to run at once in the city's history.

Watch Gery Chico address his supporters as he concedes the Chicago mayor's race.

The Chico camp was confident early Tuesday, feeling that the campaign's ground game could carry the day despite low voter turnout.

The 62-year-old former mayoral chief of staff and head of the school board, park district and city colleges spent Tuesday making a last-minute push for votes in 11 wards all across the city. Chico kept particularly close tabs on returns from the Southwest and Southeast Sides of the city, where he performed well in 2011's mayoral race, which he lost to Rahm Emanuel.

Susana Mendoza addresses her supporters as she concedes the Chicago mayor's race.

"I'm proud that we gave it our best shot," she said. "To everyone who voted for me and even those who didn't: Know that I see you, hear you and I'll never, ever stop fighting for you."

Having lost the mayoral race, Mendoza will return to her role as the state's comptroller.

Watch Amara Enyia address her supporters as she concedes the Chicago mayor's race.

Enyia stepped to the podium to concede minutes later.

Enyia received several star-powered endorsements over the course of her campaign from Chicago-born rappers Kanye West and Chance the Rapper.

You ran an amazing race. Alot of ppl, young and old, went out in the cold to knock on doors and canvas for you. I got alot of ppl texting me to tell me they voted for the first time in their lives because of you. Thank you for your dedication to the city and its ppl. 💯💯 pic.twitter.com/a5wo5fWtH8

"You ran an amazing race," Chance tweeted about Enyia. "I got alot (sic) of ppl texting me to tell me that they voted for the first time in their lives because of you. Thank you for your dedication to the city and its ppl."

Bill Daley addresses his supporters as he concedes the Chicago mayor's race.

Daley was in third place when he addressed supporters about 9:40 p.m.

"I'm here with an outcome none of us wanted. But because we respect the democratic process, we all must accept it and we will move on," he said, congratulating Preckwinkle and Lightfoot on their victories. "No matter who wins in April, our commitment to Chicago will never end."
Report a correction or typo
Related topics:
politicschicagoloopvotingelection daychicago mayor electionpoliticselection
Copyright © 2022 WLS-TV. All Rights Reserved.
CHICAGO MAYOR ELECTION
Chicago FOP president turns in badge, mayoral ambitions no joke
Harold Washington documentary set to premiere at Chicago Film Festival
Lightfoot says 'it's not a gimme' she'll seek re-election
'City So Real' is a pulsating portrait of Chicago
TOP STORIES
ISP trooper, woman ID'd after found dead inside parked car: police
Family of hospitalized 7-year-old girl encourages COVID-19 vaccination
Dad charged and fired from job after racist tirade posted on TikTok
Family continues to seek new leads in unsolved Naperville murder
What to know about stock market's recent ups and downs
Cause of death revealed for 23-year-old woman found dead after date
34 state prisons on COVID lockdown as cases soar
Show More
Illinois reports 9,462 new COVID cases, 81 deaths
Russia-Ukraine conflict explained
Activists fight for civil rights charges in murder of Laquan McDonald
Girl, 8, killed in shooting 'hoped for a better life,' family says
Tips for tax season
More TOP STORIES News