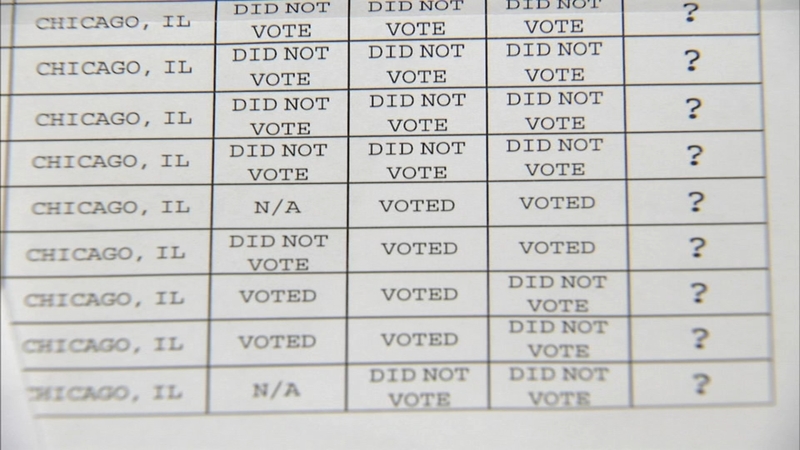 CHICAGO (WLS) -- With an election just days away, Chicago mailboxes are filled with election mailers, but there is one that caught the eye of Old Town resident Charlie Thompson that did not seem right.

"It seem very odd when we got it, it kind of looked official, kind of not," said Thompson.

He and his wife received separate letters from something called "The City of Chicago Voter Report". As a tactic to get people out to vote, the mailer lists the Thompsons' voting record and a number of their neighbors records for the past 3 elections.

"I think it is super important to get out and vote I have no problem sharing whether I voted or not, it's the idea they would try to scare people in doing it seems wrong," said Thompson.

The mailing did not come from the Chicago Board of Elections. On Friday, the Board received several complaints from voters, primarily from North side wards. Because voting records are public, the mailers are legal.

"These are really a nuisance for voters, these are irritating for voters, the best thing you can do is pitch it and don't pay attention to it," said Chicago Board of Elections spokesman Jim Allen.

So, who sent the mailers? Because they were sent to more than one ward, the Election Board assumes a mayoral candidate is behind it.

While the City of Chicago Voter Report is a bogus name, the return address, 55 E. Monroe Suite 3800, does exist as office space. With his mailer in hand, voter Wayne Foraker came to the building looking for answers, only to find "The Voter Report" doesn't exist.

Like Foraker, some voters say the mailer may have an opposite effect and shame them into not voting. The Board of Elections says the mailer tactic is not unique to Chicago, it has been used in other states, usually when elections are expected to be close.
Report a correction or typo
Related topics:
politicschicagochicago mayor electionelectionpolitics
Copyright © 2022 WLS-TV. All Rights Reserved.
TOP STORIES
Person of interest in custody in Highland Park parade shooting: police
6 dead, 31 hurt in Highland Park parade shooting
Highland Park parade shooting victims range in age from 8 to 85
55 shot, 7 killed in July 4 weekend violence: CPD
More severe storms possible overnight in Chicago area: LIVE RADAR
Boy, 10, wounded while inside bedroom in Englewood
5 wounded in Parkway Gardens shooting
Show More
Chicago Weather: Heating up Tuesday
Jayland Walker was unarmed when 8 Ohio officers opened fire on him
Aurora celebrates 4th of July with annual parade
1 killed in Little Village hit-and-run
History of Nathan's 4th of July hot dog eating contest
More TOP STORIES News